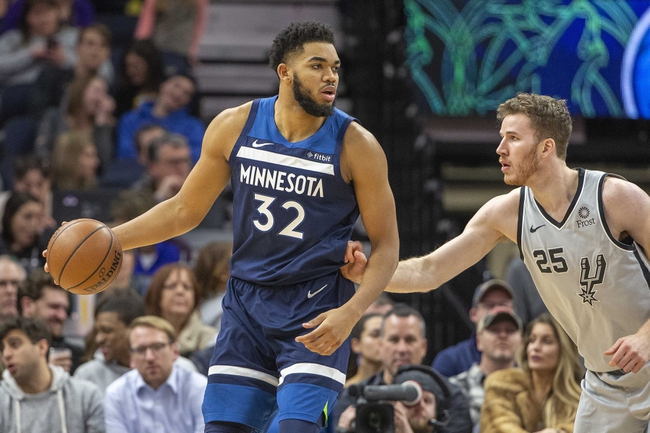 The San Antonio Spurs head to Minnesota on Wednesday for a game against the Timberwolves in a game between two teams in the Western Conference.  San Antonio was defeated in their last game 13-against the Memphis Grizzlies by the score of 113-109.  Lamarcus Aldridge led the Spurs in points on the night, scoring 19 points while shooting 8 of 15 from the field and 3 of 4 from the free throw line.  Rudy Gay led the Spurs in rebounds on the night with 6, including 2 on the offensive boards.  DeMar DeRozan led the Spurs in assists with 7 while also recording 7 rebounds and 12 points.

San Antonio is now 5-5 on the season and are currently in 3rd place in the Southwest Division.  DeMar DeRozan leads the Spurs in points per game with 19.4. Trey Lyles has been the Spurs most productive rebounder and has averaged 7.7 per game this season.  Dejounte Murray is leading San Antonio in assists per game as he is averaging 5.1.  The Spurs come into Wednesday’s game with a clean bill of health as they do not have any players listed on their injury report.

The Minnesota Timberwolves welcome the San Antonio Spurs into town after beating the Detroit Pistons in their last game by the score of 120-114.  Andrew Wiggins led the Timberwolves in points on the night, scoring 33 while shooting 12 of 20 from the field and 6 of 8 from the free throw line.  Karl-Anthony Towns was Minnesota’s leader in rebounds with 6, with 2 coming offensively as well as assists as Towns recorded 6 on the night to go along with his 25 points.

On the year Minnesota is now 6-4 which places them in 3rd place in the Northwest Division.  Andrew Wiggins leads the Timberwolves in points per game on the season with 25.5.  Karl-Anthony Towns continues his dominant season and leading the Timberwolves in assists with 4.2 per game, rebounds per game with 12.1 and blocks per game with 1.8.  Minnesota comes into Wednesday’s game with 3 players listed on their injury report as Jordan Bell, Jeff Teague and Shabazz Napier are all listed as out.