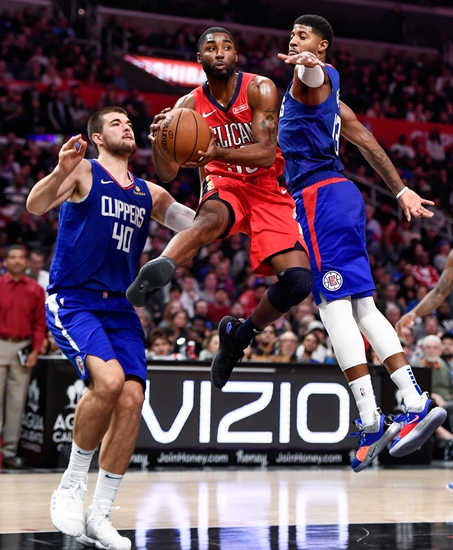 The Los Angeles Lakers (15-2) will take its NBA-best record into Smoothie King Center in New Orleans on Wednesday to face the Pelicans (6-11) with hopes of winning their ninth consecutive game.

Hopes for the Pelicans winning at home aren’t great considering that the Lakers haven’t lost outside of Staples Center all year long. Los Angeles lost a home game to Toronto 113-104 on Nov. 10, while its other loss came on opening night when the Lakers lost a designated road game at Staples against the Clippers, 112-102. But in road games outside of Staples Center, Los Angeles is 7-0. Interestingly enough, however, the Lakers are only winning by an average of 6.3 points, well under their home margin of victory of 15.5 points per game.

In the Lakers’ most recent game, a 114-104 win at struggling San Antonio, LeBron James led all scorers with 33 points and 14 assists while former Pelican Anthony Davis added 19 points and 12 rebounds. Kentavious Caldwell-Pope added 14 points on 3-of-5 shooting from long range, and Ramon Rondo hit all three of his long-range shots coming off the bench for 13 points.

After the Pelicans started the season at 1-7 knowing the Zion Williamson was still a way off before returning from knee surgery, things looked bleak in New Orleans. But since that time, the Pelicans have won five of nine including four of their last seven. They are coming off of back-to-back road losses, falling 128-120 at Utah and 134-109 at the Clippers. But New Orleans now returns home where it has won the last three games, including a win over those same Clippers as well as Portland and Phoenix.

In the most recent loss to the Clippers, Brandon Ingram led his team in scoring with 24 points to go along with eight rebounds and five assists. Rue Holiday added 18 points and seven rebounds while E’Twaun Moore added 17 points off the bench on 3-of-6 shooting from 3-point range. JJ Redick scored 12 points in the loss against his former team, and Jahlil Okafor with six rebounds in the losing effort.