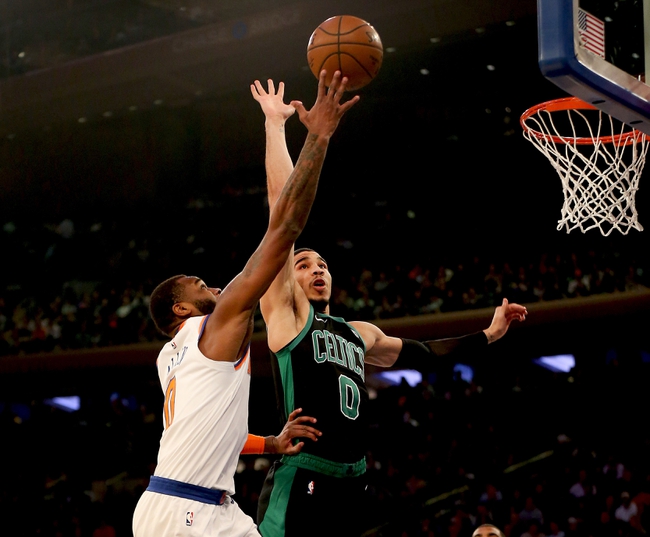 The Boston Celtics (1-1) hit the road for a matchup against the New York Knicks (0-1).  The Celtics won at home against the Toronto Raptors 112-106. The Knicks dropped their season opener to the Spurs 120-11.

The Celtics were guided by Jaylen Brown in the game, Brown had 25 points and 9 rebounds in the win.  Kemba Walker added 22 points on 8 of 22 shooting. As a team, the Celtics shot 34% from 3 point range and 94% from the free throw line.  The Celtics out scored the Raptors in the paint 54 to 36. The Celtics had a total of 21 assists to just 9 turnovers in the game.

In the 9 point loss to the Spurs, the Knicks saw 3 of their starters score at least 20 points.  Marcus Morris Sr. led the way with 26 points. Julius Randle contributed a double-double in the game.  Randle had 25 points and 11 rebounds. As a team, the Knicks had 16 steals and 24 assists.

The over was 41-28 when the Celtics were the favorite.

The last 10 matchups between these two teams have seen the Celtics win 7 of them.  The Celtics during those games are 5-4-1 ATS. The Knicks were up one going into the 4th quarter against the Spurs and then the Spurs rallied.  While I think the Knicks have a good interior duo in Morris Sr. and Randle, the Knicks also have the talented rookie in RJ Barrett. However, the Celtics have out matched the Knicks in head to head games recently.  The Celtics are coming off an impressive home win as well. Final score prediction, Celtics win and cover 111-103.