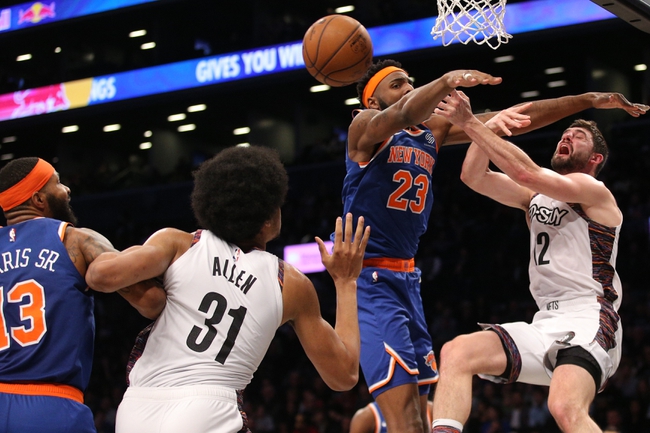 The Brooklyn Nets travel to New York on Sunday for a game against the Knicks, but first must play the Detroit Pistons on Saturday.  In their last game, the Nets were defeated by the Los Angeles Lakers by the score of 128-113.  Kyrie Irving led the Nets in points in the game against the Lakers, scoring 20 while shooting 7 of 17 from the field and 3 of 4 from the free throw line.  Spencer Dinwiddie led the Nets in assists as he recorded 13 while playing 30 minutes on the night.  Jarrett Allen was the Nets leading rebounder in the game as he recorded 8 boards, including 2 offensively.

With the loss against Los Angeles, the Brooklyn Nets are now 18-25 on the season, which places them in 4th place in the Atlantic Division.  On the year Spencer Dinwiddie leads the Nets in points per game with 21.5 and in assist per game with 6.5. Jarrett Allen leads the Nets in rebounds per game with an average of 9.7.  The Nets enter Saturday’s game with 2 players listed on their injury report as DeAndre Jordan is out while Nicolas Claxton is day to day.

The New York Knicks welcome the Brooklyn Nets to town on Sunday after losing their last game to the Toronto Raptors 118-112.  Marcus Morris Sr. was the main contributor for the Knicks as he led New York in points, scoring a total of 21 while shooting 7 of 15 from the field and 4 of 5 from the free throw line.  Julius Randle led New York in rebounds with a total of 11 in the game with 4 coming offensively.  Elfrid Payton led the Knicks in assists with 11 while playing 35 minutes in the game against the Raptors.

The Brooklyn Nets have scored an average of 109.4 points per game this season while allowing 112 points per game.  The New York Knicks have scored 104.2 points per game while allowing 112.1 points per game.  As of Saturday morning, the Nets are 0-5 in their last 5 games while the Knicks are 1-4 and have lost 2 games in a row.  This will be the fourth and final meeting of the season between and the Nets have the season series advantage of 2 game to 1.  Brooklyn won by the scores of 113-109 and 103-101 while the game that New York won was 94-82.  The Nets are 7-13 on the road this season while the Knicks are 6-17 at home.  I believe this will be a close game, but overall, the better team here is the Nets so I will be going with them in this one.  Nets win 110-104 and beat the spread.