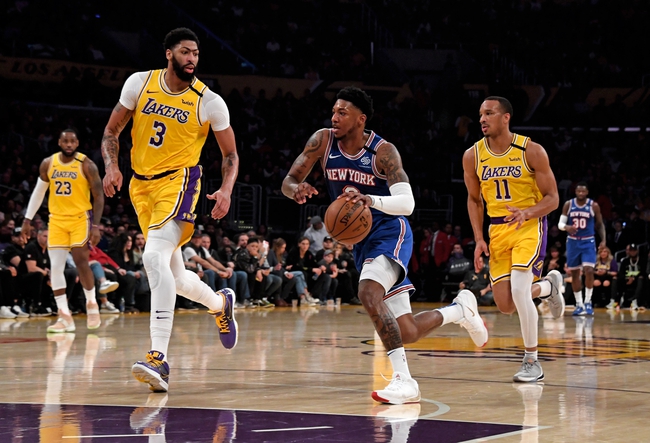 In the Lakers loss to the Celtics, Los Angeles was led on offense by JaVale McGee.  McGee was 7 of 9 from the floor, hitting 3 free throws, recording 18 points.  The Lakers shot 44% from the floor and 27% from 3-point range.  The Lakers were out rebounded, 60 to 48.  Los Angeles lost the game from deep, allowing Boston to connect 16 times from distance.  The Lakers made just 7 3-pointers.

In the Knicks win over the Cavaliers, New York was guided offensively by Julius Randle.  Randle was 7 of 17 from the floor, making all 5 free throws, totaling 19points and 9 rebounds.  Marcus Morris Sr. added 19 points as well.  The Knicks shot 48% from the floor and 39% from 3-point range.  New York won the game thanks to their defense, holding Cleveland to just 34% from the floor.  New York dominated the paint, out scoring Cleveland, 56 to 34.

Knicks are 1-5 ATS in their last 6 Western conference games.

The over is 6-1 in Knicks last 7 games against the Lakers.

The Lakers have lost 2 of their last 3, including just being routed by Boston.  The Knicks snapped their 3 game losing streak with the win over Cleveland.  Los Angeles has been great on the road, posting an 18-4 record to this point.  The Knicks have won 7 of the last 10 matchups against the Lakers.  I see that trend changing in this matchup.  The Lakers are the 7th highest scoring offense, while having the best field goal percentage.  The Knicks rank 28th in offensive production.  The Lakers also have the edge on defense.  New York has a losing record at home, 6-15.  The Lakers were just blown out, you can expect that LeBron James and company are ready to put that game behind them.  Final score prediction, Lakers roll to an easy cover, 121-103.