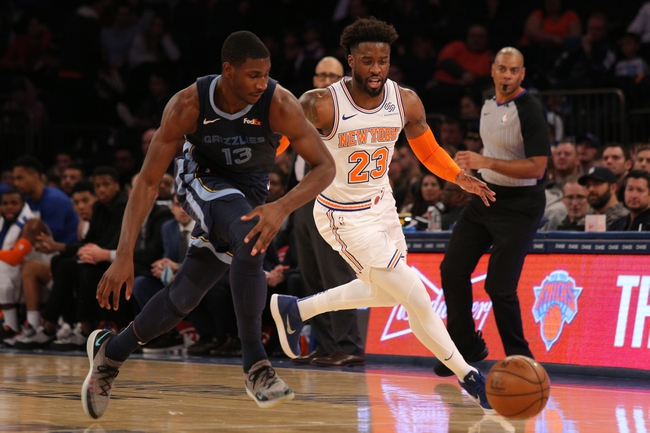 The Memphis Grizzlies go to New York, New York, to take on the New York Knicks on Wednesday at Madison Square Garden. The Grizzlies are coming off of a two-game winning streak, defeating the Phoenix Suns and the Detroit Pistons in the game prior. The win over the Pistons snapped a two-game losing streak for the Grizzlies. The Grizzlies have a back to back, playing the Denver Nuggets on Tuesday before traveling to New York to play the Knicks.

The Memphis Grizzlies are 22-24 on the season and are currently the eighth seed in the Western Conference. The Grizzlies have had a great offense this season, ranking eighth in the points per game and share the ball so well, as they rank first in assists per game, in large part due to Ja Morant's elite passing ability.

The New York Knicks are coming off of a win over the Brooklyn Nets, in a wild whirlwind of emotions night, that saw Kyrie Irving sit out due to the news of Kobe Bryant's passing and many of the player's minds being elsewhere. However, the win snapped a two-game losing streak the Knicks were on.  The Knicks will play a back to back, playing the Charlotte Hornets on Tuesday before taking on the Grizzlies on Wednesday.

The New York Knicks are 13-34 on the season and are third-worst in the Eastern Conference, only above the Cavaliers and the Hawks. The Knicks have done terribly on offense this season, ranking 28th in points per game, and will be without their rookie, RJ Barrett.

This will, unfortunately, not be the first matchup of Ja Morant versus RJ Barrett in their NBA careers. Ja Morant was selected second overall in the 2019 NBA draft, and RJ Barrett was selected third overall in the 2019 NBA draft. At least somewhat, these players will always be tied to each other, due to their being a huge debate on who should have gone second overall after Zion Williamson was selected. However, it was reported that RJ Barrett would likely miss another week with his injury, so the matchup that everyone was waiting for will have to wait. With that being said, Morant has the better team, and without Barrett, the Grizzlies will field far more talent than the Knicks, and I think that ultimately that helps propel them to a victory here. Final Score Prediction, Memphis Grizzlies win 124 - 117.