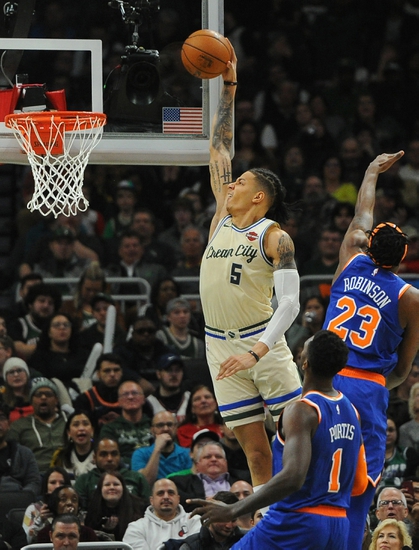 The Milwaukee Bucks head to New York, NY on Saturday for a game against the Knicks in a matchup of two teams from the Western Conference.  In their last game, Milwaukee defeated the Los Angeles Lakers by the score of 111-104.  As is the norm for the Milwaukee Bucks their team was led by Giannis Antetokounmpo who scored 34 points on the night while shooting 11 of 25 from the field and 14 of 17 from the free throw line.  Antetokounmpo also led Milwaukee in rebounds with 11, including 3 coming offensively.  Antetokounmpo also led the Bucks in assists on the night with 7 while playing a total of 32 minutes against the Lakers.

On the year, the Milwaukee Bucks are now 25-4 and are currently in 1st place in the Central Division.  Giannis Antetokounmpo leads the Bucks in points per game with 31.8 and in rebounds per game with 12.8.  Eric Bledsoe leads the Bucks in assists per game as he has averaged 5.7 so far this season.  The Bucks enter Saturday’s game against the Knicks with 2 players listed on their injury report as Dragan Bender is listed as out while Wesley Matthews is listed as day to day.

The New York Knicks welcome the Milwaukee Bucks to New York on Saturday after winning their last game against the Atlanta Hawks by the score of 143-120.  R.J. Barrett was the main contributor for the Knicks as he led New York in points, scoring a total of 27 while shooting 10 of 13 from the field and 5 of 8 from the free throw line.  Mitchell Robinson led New York in rebounds with a total of 13 in the game with 6 coming offensively.  Elfrid Payton led the Knicks in assists with 9 while playing 20 minutes in the game against Atlanta.

The Milwaukee Bucks have scored an average of 120.7 points per game this season while allowing 107.9 points per game.  The New York Knicks have scored an average of 102.7 points per game and have allowed 111.5 points per game on the year.  The Bucks won the first meeting of these two teams this season by the score of 132-88 in a game played in Milwaukee.  In their last 5 games, Milwaukee is 4-1 while New York is 3-2.  I am going to go with the Bucks to win this one as they have been dominant all season and pulling out a win against a team like the Knicks shouldn’t be a problem.  I am also going with the Bucks due to the fact that they are 9-1 in their last 10 games against the Knicks.  I will be looking for the Bucks to cover the spread in this one as in the last 3 times these two teams have played, the average score is 117.67 to 93 in favor of the Bucks.  Milwaukee wins 120-106 and covers the spread.