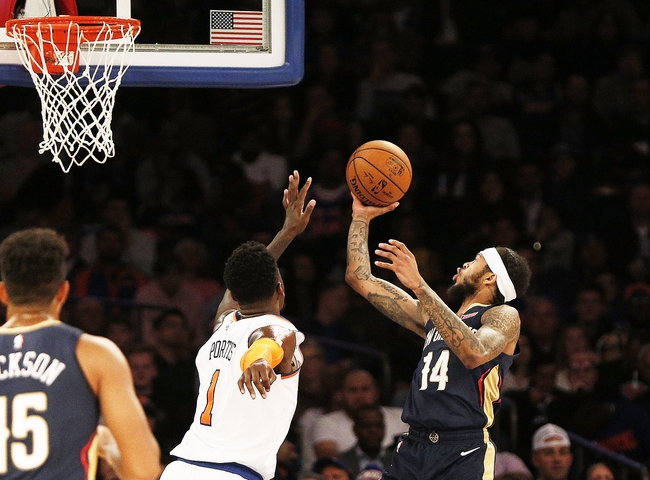 In the Pelicans win over the Bulls, New Orleans was led throughout the game by Brandon Ingram.  Ingram converted on 7 of 19 attempts from the floor, knocking down 11 foul shots, registering 29 points and 11 assists.  The Pelicans shot 47% form the floor and 34% from 3-point range.  The Pelicans were able to pull away, thanks to out scoring the Bulls, 26 to 12 from the charity stripe.

In the Knicks loss to the Jazz, New York was guided throughout the game Frank Ntilikina.  Ntilikina converted on 6 of 10 attempts from the floor, hitting 3 foul shots, recording 16 points.  The Knicks shot 43% from the floor and 36% from distance.  The Knicks defense struggled in the game, allowing the Jazz to connect 16 time from 3-point range.  New York was out rebounded, 58 to 47.

Knicks are 3-6 ATS in their last 9 January games.

The Pelicans will be without Jrue Holiday for this matchup, as Holiday has been downgraded to out.  New Orleans sits 12 games below the .500 mark, but have had success on offense this year.  The Pelicans are averaging over 113 points per game.  The Knicks have not had the same luxury, as New York ranks 29th in scoring offense.  Defensively, the Pelicans hold the edge over the Knicks as well, giving up 2 less points per game.  While this could be a close game, it will come down to who can shoot the foul shots better.  Both teams are horrendous from the foul line for league averages, but the Pelicans have the edge at 74%, that ranks 27th.  New York ranks 30th at less than 69% from the charity stripe.  I will not be touching this game, but I'll side with New Orleans on the road.  Final score prediction, Pelicans will win and cover, 113-105.