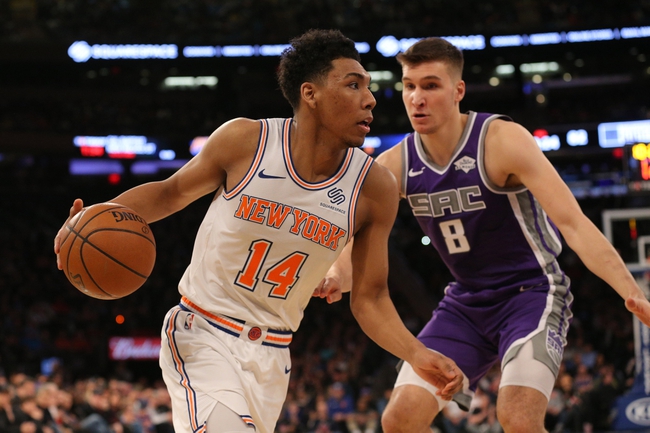 This matchup pairs two teams with identical records, searching for their 2nd win of the season.  The Sacramento Kings (1-5) hit the road for clash with the New York Knicks, who are also (1-5).  The Kings snapped their 5 game losing streak, after beating a very solid Utah Jazz team 102-101.  The Knicks have lost 2 in a row and are coming off a road loss to the Boston Celtics, 104-102.

In the win over the Jazz, the Kings were led by De'Aaron Fox.  Fox was 8 of 17 shooting, totaling 25 points and 4 assists.  Harrison Barnes scored on an offensive board with just 2.9 seconds remaining, to help secure the Kings first win of the season.  The Kings were committed 17 turnovers in the game and were out scored 13-5 in the final 5 minutes.

Kings are 1-8 ATS in their last 9 games overall.

Knicks are 5-1 ATS in their last 6 games playing on 1 days rest.

Looking at this series, the under has been profitable cashing in 7 of the last 8 games.  Neither offense to this point is scoring over 101 points per game.  The Knicks should win based off the Kings giving up a 3 point percent success rate of almost 40% thus far.  While I think the Knicks should win, I am going to take the under here.  The recent trends have been to profitable to just ignore.  Final score prediction, Knicks win and the total goes under 106-102.