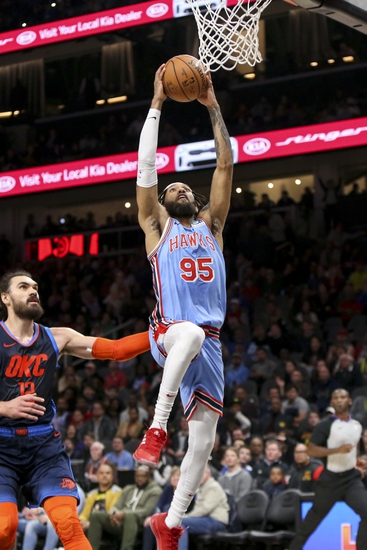 In the Hawks win over the Clippers, Atlanta was guided on offense by John Collins.  Collins converted on 12 of 22 attempts from the floor, sinking all 6 free throw attempts, totaling 33 points and 16 rebounds.  The Hawks shot 35% from the floor and 31% from 3-point range.  Atlanta out rebounded Los Angeles, 71 to 58.  Atlanta got dominated in the first half, trailing by as many as 21 in the game.  The Hawks overcame that in the 2nd half for a come from behind victory.

Hawks are 2-5 SU in their last 7 games against the Thunder.

Thunder are 6-2 ATS in their last 8 Eastern conference games.

The Hawks snapped a 2 game skid with their win over the Clippers, while the Thunder have won 3 straight.  The Hawks have not been good on the road, posting a 5-18 record.  The trends have showed tickets have been profitable in Oklahoma City last 8 games ATS against the Eastern conference.  The Hawks are near the bottom in scoring defense, look for Chris Paul to keep the Hawks off balanced and lead the Thunder offense to a total that is over their season average of 110.  Final score prediction, Thunder will win and cover,