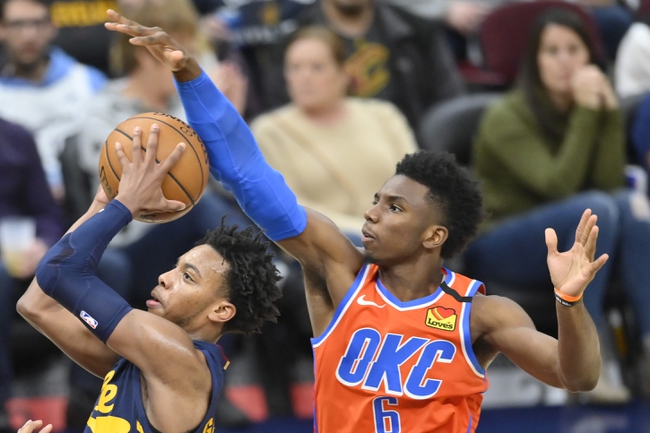 On Wednesday, the Cleveland Cavaliers are in Oklahoma City, OK for a game against the Thunder in a matchup of teams from the Eastern and Western Conference.  In their last game, the Cavaliers were defeated by the New York Knicks by the score of 139-134 in overtime.  Kevin Love led the Cavaliers in points with 33 while shooting 12 of 20 from the field and 5 of 5 from the free throw line.  Love was also the leader in rebounds for Cleveland as he recorded 13, with 1 coming offensively.  Collin Sexton led Cleveland in assists in the game with 7 while playing a total of 40 minutes against the Knicks.

The Cavs enter their game against the Thunder with a record of 13-38 and are currently in 5th place in the Central Division.  Collin Sexton is the Cavs leading scorer and has averaged 19.8 points per game.  Tristan Thompson leads the Cavs in rebounds per game with 10.4.  Darius Garland leads the Cavaliers in assists per game with 3.7.  Cleveland enters Wednesday’s game with 2 players listed on their injury report as Ante Zizic is listed as out while Tristian Thompson is day to day.

The Oklahoma City Thunder welcome the Cleveland Cavaliers to town on Wednesday, after winning their last game against the Phoenix Suns by the score of 111-107.  The Thunder were led in points by Danilo Gallinari who recorded 27 points on the night while shooting 9 of 17 from the field.  Shai Gilgeous-Alexander led the Thunder in rebounds against the Suns as he recorded a total of 9, with 3 coming offensively. Chris Paul led Oklahoma City in assists with 10 in the game while playing a total 34 minutes.

Oklahoma City is now 30-20 on the year and are in 3rd place in the Northwest Division. Shai Gilgeous-Alexander has been Oklahoma City’s driving force on offense as he is leading the team in points per game with 19.4.  Steven Adams has been the Thunder’s most productive rebounder and is averaging 9.3 rebounds per game.  Chris Paul continues to have a stellar career and is currently leading the Thunder assist man as he is averaging 6.6 assists per game.  The Thunder enter Wednesday’s game at full strength as they do not have anyone listed on their injury report