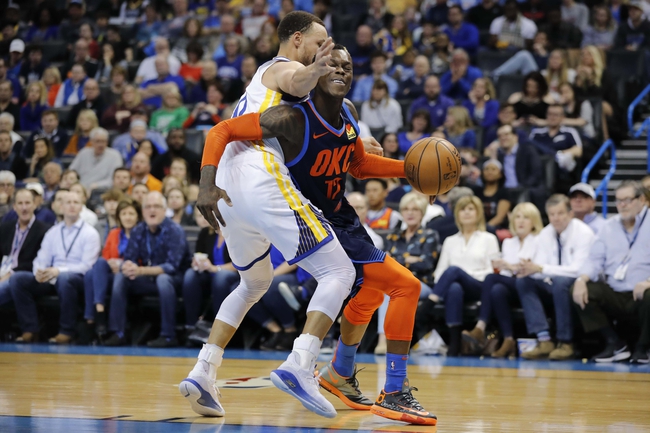 The Golden State Warriors enter this road contest with a record of (0-1) and the Oklahoma City Thunder are (0-2).  The Warriors are coming off a 19 point home loss to the Clippers, 141-122. The Thunder most recently lost 97-85 to the Wizards.

In the loss to the Clippers, the Warriors were led by Stephen Curry.  Curry had 23 points on 8 of 20 shooting.  D'Angelo Russell was 4 of 8 from 3 point range and totaled 20 points in the loss. The Warriors as a team went 29 of 30 from the free throw line.  The Warriors defensively allowed the Clippers to shoot an incredible 62.5% from the field.

The Thunder saw two players finish in double figures in the loss to the Wizards.  Shai Gilgeous Alexander guided the team with 28 points.  He was 10 of 17 from the field, while adding 7 rebounds and 3 blocks. Danilo Gallinari added in 18 points and 5 rebounds in the game.  The Thunder had 19 turnovers in the game.

The Warriors were 8-5 ATS as an away favorite.

The over is 24-15 when the Warriors were the away favorite.

The Thunder were 12-9 ATS as an underdog.

The under was 16-5 when the Thunder were an underdog.

If the Thunder are going to compete in this game, the Thunder will need a good showing from Chris Paul.  Paul struggled in the last game, only scoring 6 points. The Thunder lost a lot of their offense when Russell Westbrook went to the Rockets.  The Warriors were not the same Warriors team with Klay Thompson hurt in the game against the Clippers.  Daymond Green also missed some minutes in the game with an injury.  The Warriors are banged up and are not the same without Thompson.  Chris Paul will get back on track and will help the Thunder get a win at home.  Final score prediction, Thunder win and cover 116-112.