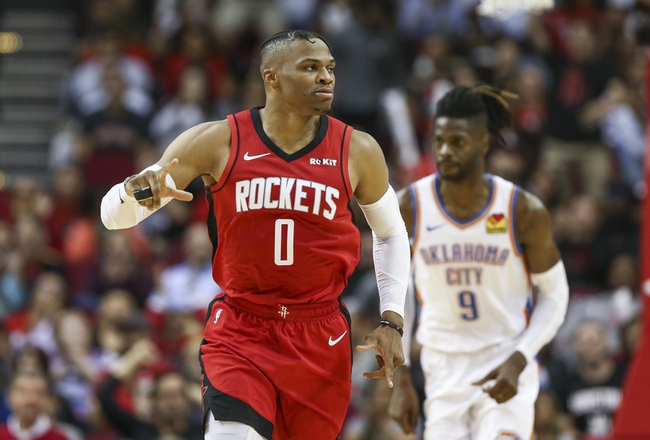 In the Rockets win over the 76ers, Houston was guided on offense by James Harden.  Harden was 13 of 24 attempts from the floor, sinking all 12 free throws, registering 44 points and 11 assists.  The Rockets shot 48% from the floor and 38% from 3-point range. Houston out rebounded Philadelphia, 56 to 54.  The Rockets led by as many as 18 points in the game.

In the Thunder win over the Nets, Oklahoma City was led offensively by Chris Paul.  Paul made 9 of 15 attempts from the floor, connecting on all 6 foul shots, recording 28 points.  The Thunder shot 41% from the floor and 30% from distance.  The tHunder won the game from the foul line, out scoring Brooklyn, 24 to 12.  Each team had 17 turnovers in the game.

The two team have split the last 10 games, but the Thunder are 7-3 ATS in those games.  The Rockets are 11-7 on the road, while the Thunder are 12-6 at home.  Houston leads the league in points scored, averaging over 119 per game.  The Thunder are in the middle of the pact, giving up over 113 points when at home.  However, the Thunder do have the best 3-point defense when at home, this could cause trouble for Harden and company from distance.  Overall the Thunder have been playing better than Houston recently, I'll side with Oklahoma City.  Final score prediction, Thunder will outright win, 1114-111.