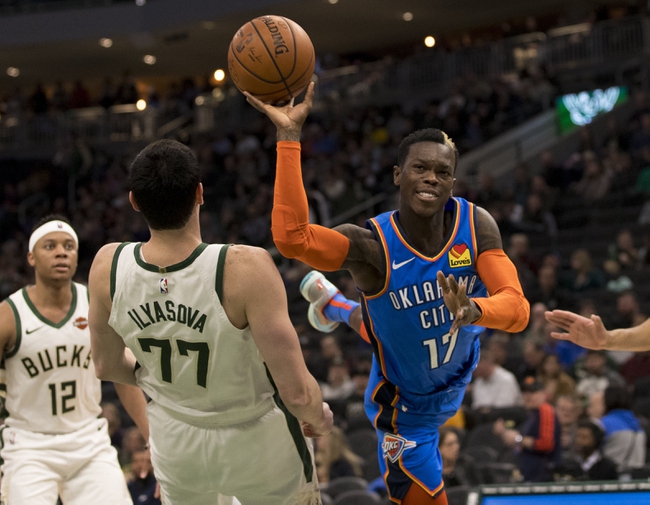 The Milwaukee Bucks head to Oklahoma City for their game against the Thunder on Sunday, after losing their last game to the Utah Jazz by the score of 103-100.  In their game against the Jazz, Giannis Antetokounmpo was in his usual MVP form as he led the Bucks in points scoring 30 on the night while shooting 10 of 22 from the field and 8 of 13 from the free throw line.  Antetokounmpo also led the Bucks in rebounds as he was a monster on the boards all night recording 13 rebounds with 4 coming offensively.  Eric Bledsoe led Milwaukee in assists as he dished out 5 on the night in the 32 minutes that he played.

On the year, the Milwaukee Bucks are now 6-3 with a road record of 4-2 and will be a tough match up for the Thunder.  Giannis Antetokounmpo leads the Bucks in points per game with 29.1, rebounds per game with 14.1 and assist per game with 7.2.  Looking at the team stats, it’s clear that in order for the Bucks to be successful, Antetokounmpo has to be the lead man for Milwaukee.  The Bucks enter Sunday’s game with a clean bill of health as they do not have any players listed on their injury report.

The Oklahoma City Thunder are at home on Sunday to face the Milwaukee Bucks, but first must play the Golden State Warriors on Saturday.  In the Thunder’s last game, they were defeated by the San Antonio Spurs by the score of 121-112.  The Thunder were led in points by Danilo Gallinari who recorded 27 points on the night while shooting 7 of 10 from the field, including shooting 8 of 9 from the free throw line.  Oklahoma City center Nerlens Noel recorded a team high in rebounds with 6 while also scoring 7 points and recording 2 assists.  Dennis Schroder led the Thunder in assists on the night as he recorded 9 assists in the 27 minutes that he played.

Oklahoma City is now 3-4 on the year and has a record of 3-2 at home.  Shai Gilgeous-Alexander has been Oklahoma City’s driving force on offense as he is leading the team in points per game with 22 while shooting 48.5% from the field.  Steven Adams has been the Thunder’s most productive rebounder and is averaging 10.5 rebounds per game.  Chris Paul continues to have a stellar career and is currently leading the Thunder assist man as he is averaging 4.8 assists per game.  The Thunder enter Sunday’s game with just one player listed on their injury report as Andre Roberson is listed as out.