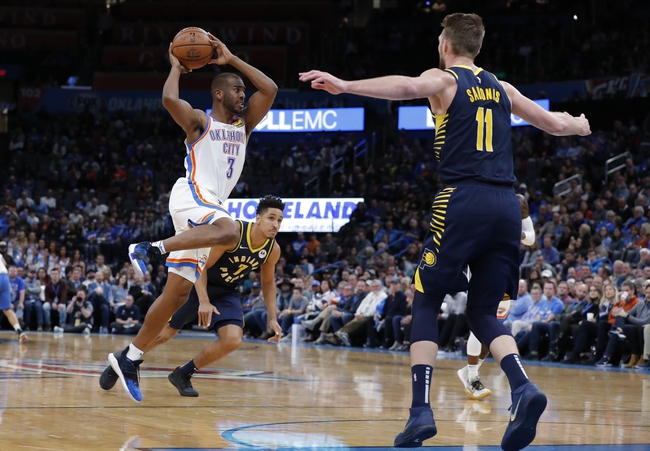 One of the best road teams in the NBA will look to continue its success away from home when the Minnesota Timberwolves (10-10) travel to Chesapeake Energy Arena in Oklahoma City to face the Thunder (8-12) in Western Conference action.

Minnesota, barely hanging on to a top-eight spot in the West, holds a 7-3 record on the road, meaning that it is just 3-7 at home this year. That record trails just the Lakers, Milwaukee, and Dallas in road wins, and that’s a good thing for the Timberwolves, who have struggled so far. Minnesota is in the middle of stretch of 14-of-22 games that will be played away from Target Center, which might just be the thing that pulls it out of its early-season funk. The Timberwolves have won just two of their last six games and three of their last nine, but they are 4-1 in their last five road games including wins over San Antonio and Utah along the way.

The last road game was a loss, however, when Minnesota dropped a 121-114 decision in Dallas. The Timberwolves led through three quarters, but were outscored 41-30 in the fourth quarter to lose the game. Karl Anthony-Towns and Andrew Wiggins scored 26 points apiece in the loss. Towns connected on 10-of-19 shots overall and 3-of-5 from 3-point range, but Wiggins connected on just 7-of-24 shots from the field. Towns also had nine rebounds and seven assists. Robert Covington added 22 points on 6-of-10 shooting from long range with six rebounds in the win.

The Thunder are just 6-5 at home, which might just account for their 8-12 record so far this season. Oklahoma City has won just four of its last 11 games and just one of its last three at home. The last home game was Wednesday -- a 107-100 loss to Indiana. Despite the loss, Steven Adams had a monster game scoring 20 points with nine rebounds. Danilo Gallinari scored 18 points with seven rebounds, while Dennis Schroder came off the bench to also score 18 points. Shai Gilgeous-Alexander also scored 16 points despite hitting just 7-of-19 shots while going 1-of-7 from the 3-point line.

There are a lot of numbers that a person could look at and most contradict themselves when it comes to these two teams, cancelling out what would be a brilliant way to play this game. For example, Minnesota is 5-2 heads up as a road underdog this year, so maybe a thought of taking the Timberwolves and the money line might creep into someone’s head. But Oklahoma City is 5-1 at home as a favorite, which cancels out that theory. Minnesota is 7-3 against the spread as a road team, but the Thunder are 7-4 against the spread at home. Six of Minnesota’s 10 road games have gone over the total, but seven of Oklahoma City’s 11 home games have gone under the total.

But Oklahoma City has too many weapons against a Minnesota team that may enter the game a bit roughed up. While Towns is listed as probable to play Friday night with a right knee injury, Wiggins is questionable with a left thumb sprain. With the Thunder’s balanced scoring and nicked up Timberwolves defense, it’s tough to look any other way. Go with OKC minus the two points simply to take the healthier team at home.