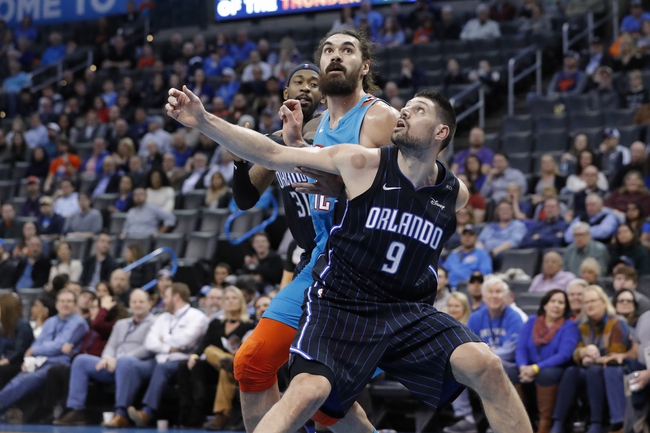 The Orlando Magic head to Oklahoma City on Tuesday for a game against the Thunder.  The Magic are coming off of a loss to the Denver Nuggets by the score of 91-87 in their last game.  Center Nikola Vucevic led the Magic in points scoring 24 while shooting 10 of 16 from the field and 3 of 3 from the free throw line.  Evan Fournier led the Magic in assists, recording 5 on the night.  Power forward Al-Farouq didn’t scored any points but did have 10 rebounds on the night which led the Magic.

On the year, the Magic are now 2-4, while recording a 0-2 record on the road.  The Magic are led in points per game by Nikola Vucevic, who has averaged 16.8 points per game this season and is shooting 43% from the field.  Vucevic has also led the Magic in rebounds per game as is averaging 9.8 per game, including 2.5 offensive rebounds per game.  D.J. Augustin is the team’s leader in assists per game and is recording 4.3 per game.  The Magic come into the game against Oklahoma City with two players listed on their injury report as Melvin Frazier Jr. and Michael Carter-Williams are both listed as day to day.

The Oklahoma City Thunder welcome the Orlando Magic to town after a win against the New Orleans Pelicans in their last game, winning by the score of 115-104.  The Thunder were led in points by Shai Gilgeous-Alexander who recorded 23 points on the night while shooting 8 of 14 from the field, including shooting 3 of 5 from three point range.  Dennis Schroder had a big night coming off of the bench for the Thunder as he recorded a team high 9 rebounds and added 17 points of his own.  Chris Paul led the Thunder in assists on the night as he recorded 9 assists in the 29 minutes that he played.

Oklahoma City is now 2-4 on the year and has a record of 2-2 at home.  Gilgeous-Alexander has been Oklahoma City’s driving force on offense as he is leading the team in points per game with 21.8 while shooting 46.1% from the field.  Gilgeous-Alexander has also been the Thunder’s most productive rebounder and is averaging 7.2 rebounds per game.  Chris Paul continues to have a stellar career and is currently leading the Thunder assist man as he is averaging 4.5 assists per game.  The Thunder enter Tuesday’s game with three players listed on their injury reports as Steven Adams and Nerlens Noel are listed as day to day, while Andre Roberson is listed as out.