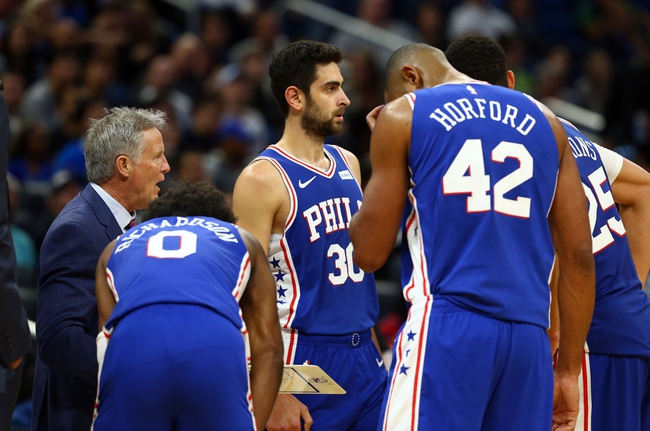 The Philadelphia 76ers head to Oklahoma City on Friday for a game against the Thunder in a match up of teams from different conferences.  In their last game, the 76ers lost to the Magic in Orlando by the score of 112-97.  Josh Richardson led the 76ers in points in the game while scoring 19 while shooting 7 of 14 from the field and 3 of 5 from the free throw line.  Tobias Harris led Philadelphia in rebounds with 10 on the night, including 2 on the offensive boards.  Harris also led the 76ers in assists as he recorded 6 on the night in the 31 minutes that he played.

After the loss, the 76ers are now 7-4 on the season, which places them in 3rd place in the Atlantic Division in the Eastern Conference.  Tobias Harris is the 76ers leader in points per game with 16.5 and in rebounds per game with 8.4.  Ben Simmons leads Philadelphia in assists per game and is averaging 6.6 per game on the season.  Philadelphia leads comes into Friday’s game with a clean bill of health as they do not have any players listed on their injury report.

The Oklahoma City Thunder are at home on Friday to face the Milwaukee Bucks.  In the Thunder’s last game, they were defeated by the Indiana Pacers by the score of 111-85.  The Thunder were led in points by Danilo Gallinari who recorded 14 points on the night while shooting 3 of 8 from the field, including shooting 8 of 8 from the free throw line.  Oklahoma City was led in rebounds by Shai Gilgeous-Alexander who recorded 6 on the night. Chris Paul led the Thunder in assists on the night as he recorded 8 assists in the 25 minutes that he played.

Oklahoma City is now 4-7 on the year and has a record of 4-3 at home.  Shai Gilgeous-Alexander has been Oklahoma City’s driving force on offense as he is leading the team in points per game with 20.1 while shooting 46.1% from the field.  Steven Adams has been the Thunder’s most productive rebounder and is averaging 9.6 rebounds per game.  Chris Paul continues to have a stellar career and is currently leading the Thunder assist man as he is averaging 5.5 assists per game.  The Thunder enter Friday’s game with two players listed on their injury report as Andre Roberson is listed as out while Hamidou Diallo is listed as day to day.