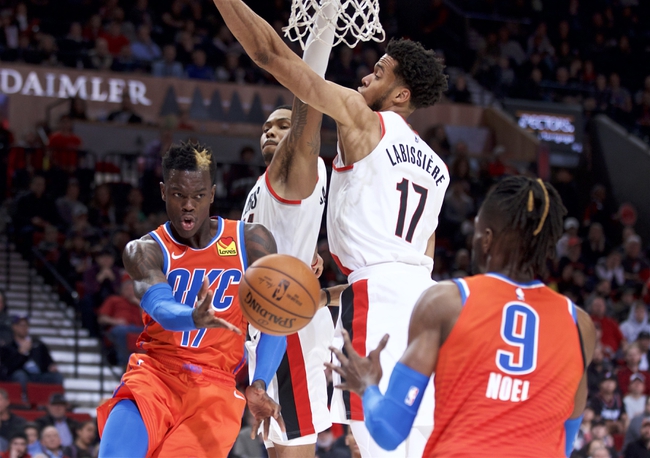 The Portland Trail Blazers travel to Oklahoma City, OK on Saturday for a game against the Thunder but first the Trail Blazers must play the Dallas Mavericks on Friday night.  In their last game, the Trail Blazers defeated the Houston Rockets by the score of 117-107.  Damian Lillard led the way for the Trail Blazers scoring 25 points while going 8 of 20 from the field and 8 of 8 from the free throw line. Lillard also led Portland in assists on the night with 7, while playing a total of 38 minutes against the Hornets.  Hassan Whiteside led the Trail Blazers in rebounds in the game with 18, including 7 coming offensively.

The Oklahoma City Thunder welcome the Portland Trail Blazers to town on Saturday, but first must face the Miami Heat on Friday night.  In their last game the Thunder lost by the score of 130-121 against the Toronto Raptors.  The Thunder were led in points by Dennis Schroder who recorded 25 points on the night while shooting 10 of 17 from the field.  Shai Gilgeous-Alexander led the Thunder in rebounds against the Raptors as he recorded a total of 6, all coming defensively. Chris Paul led Oklahoma City in assists with 11 in the game while playing a total 34 minutes.

Oklahoma City is now 23-18 on the year and are in 3rd place in the Northwest Division. Shai Gilgeous-Alexander has been Oklahoma City’s driving force on offense as he is leading the team in points per game with 20.  Steven Adams has been the Thunder’s most productive rebounder and is averaging 10 rebounds per game.  Chris Paul continues to have a stellar career and is currently leading the Thunder assist man as he is averaging 6.5 assists per game.  The Thunder currently have 2 players listed on their injury report as Abdel Nader and Steven Adams are listed as day to day while Nerlens Noel and Luguentz Dort are listed as out.