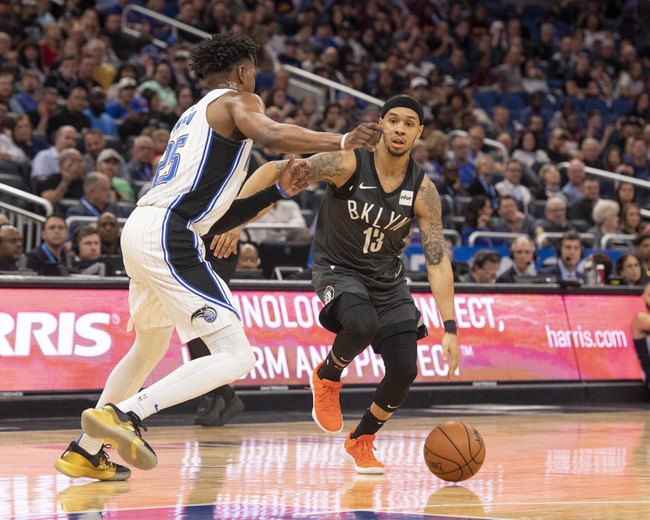 In the Nets loss to the Raptors, Brooklyn was led on offense by Spencer Dinwiddie.  Dinwiddie converted on 6 of 12 attempts from the floor, hitting 9 foul shots, registering 23 points.  Brooklyn shot 48% from the floor and 37% from distance.  The Nets took the loss, thanks to their inability to protect the ball.  The Nets committed 24 turnovers in the loss.

In the Magic loss to the Jazz, Orlando was guided offensively by Terrance Ross. Ross connected on 9 of 16 attempts, making 4 foul shots, recording 24 points.  The Magic shot 45% from the floor and 30% from 3-point range.  Orlando took the loss, thanks to the Magic defense allowing the Jazz to connect 16 times from 3-point distance.  The Magic trailed by as many as 16 points in the game.

Nets are 0-5 ATS in their last 5 games overall.

Magic are 5-1 ATS in their last 6 games as a favorite.

The over is 7-3-1 in the last 11 matchups.  The Nets have lost 5 in a row and 6 of their last 7.  This should be a low scoring game, as the Nets average just 110 per game, while the Magic rank 30th in points forwarded per contest.  Orlando also has the 2nd best scoring defense in the league, giving up less than 104 per game.  Brooklyn also has the 3rd best field goal percent defense.  Look for this to be a low scoring game, as the Magic come out on top.  Final score prediction, Magic win and the total goes under, 105-101.