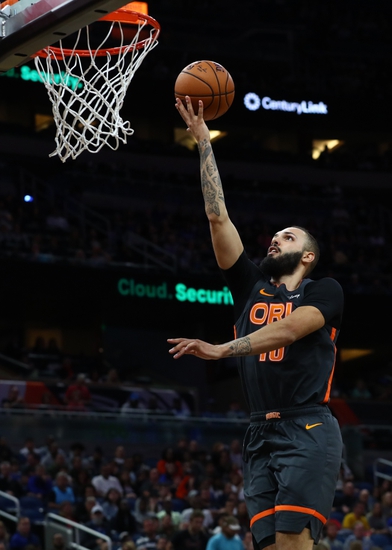 Two teams desperately looking to get something positive started this season will meet in Orlando when the Golden State Warriors (4-16) head to Amway Center to take on the Magic (7-11) on Sunday. But while the Warriors enter the game with the NBA’s worst record and miles away from the playoff conversation in the ultra-competitive Western Conference, Orlando sits just one spot out of the top eight in the East.

If Orlando wants to start talking playoffs, however, it will need to find more consistency on the offensive side of the ball. The Magic are the worst offensive team in the NBA, averaging just 101.1 points per game, and that has shown in the team’s last five games in which it has won just once. Even though Orlando holds a 6-4 record at home this year, it is coming off of a 90-83 defeat at home, allowing Norman Powell to score a career-high 33 points along the way.

In that Toronto game, Evan Fournier made just 3-of-9 shots from the field but scored 19 points thanks to 12-of-14 shooting from the free-throw line. Markelle Fultz added 15 points and Mo Bamba scored 11 points with seven rebounds off the bench. Khem Birch was held to four points but he pulled in 12 rebounds in the loss.

But while things haven’t been great for Orlando, it has been much worse for Golden State. The Warriors have lost four of their last five and 11 of their last 13, and many of the losses have been ugly, with the 142-94 loss at Dallas being the worst of the group. Golden State has the fourth-worst defense in the NBA on the road and its 2-9 record as a road team backs up that point. with this being the second game of a five-game road trip for the Warriors, things might get worse before they get any better.

On Friday night, the Warriors dropped a 122-105 game at Miami that was over almost as fast as it started. The Heat led 41-21 after one quarter and cruised the rest of the way to the win. The Warriors had six players score in double figures but couldn’t hang with Miami’s 53.7 percent shooting from the field and 52.0 percent connection rate from 3-point range. Jordan Poole led Golden State in scoring with 20 points on 5-of-6 shooting from long range, while Eric Paschal added 17 points in the loss. Alex Burks scored 16 points, Willie Cauley-Stein added 14, Omari Spellman scored 12, and Marquese Chriss scored 10 with six assists and five rebounds.

A closer look at Orlando’s wins shows that when it wins, it wins big. Of their seven wins, the Magic have won by 11 or more points five times. The Magic’s elite defense, ranking second in the NBA allowing just 102.3 points per game, holds opposition down and when that offense connects, that leads to a big win. In addition, more than half of Golden State’s losses have been by 11 or more points.

A Golden State team that will not only be without its big guns like Stephen Curry and Klay Thompson, but also Russell, Kevon Looney, and possibly Damion Lee, with Green clearly not at his best playing limited minutes, is simply impossible to take even with 11 points. Take Orlando and cheer for this to be one of those big offensive nights.