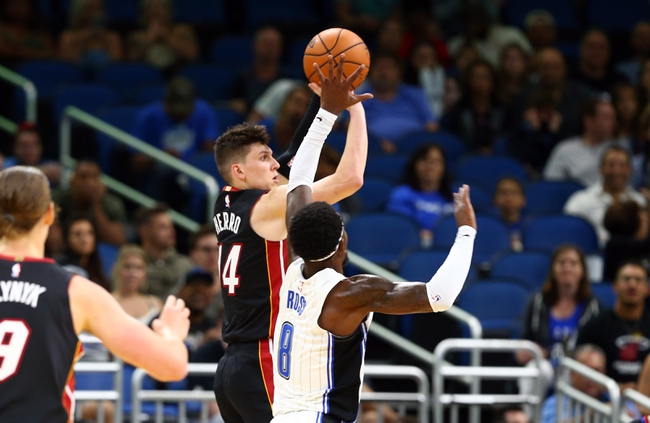 The Miami Heat head to Orlando, Florida on Friday for a game against the Magic in a matchup of two teams from the Southeast Division.  In their last game Miami was defeated by the Washington Wizards by the score of 123-105.  Jimmy Butler led the Heat in points with 27, while shooting 6 of 10 from the field and 15 of 19 at the free throw line. Bam Adebayo led the Heat in rebounds on the night, recording 14 with 3 coming offensively.  Adebayo also led the Heat in assists in the game with 5 while playing a total of 36 minutes.

With the loss against the Wizards, the Heat are now 24-9 on the season which places them in 1st place in the Southeast Division. Jimmy Butler leads the offense in points per game and is averaging 20.8 per game.  Butler also leads the Heat in assists per game with 6.6.  Bam Adebayo leads the Heat in rebounds per game on the season as he is averaging 10.6 per game.  The Heat come into Friday’s game with 1 player listed on their injury report as Justise Winslow is listed as out.

The Orlando Magic welcome the Miami Heat to town on Friday after winning their last game against the Washington Wizards by the score of 122-101.  D.J. Augustine led the Magic in points as he scored 25 on the night while shooting 7 of 15 from the field and 9 of 10 from the free throw line. Augustine was also the leader for the Magic in assists on the night with 9 while playing 31 minutes in the game.  Nikola Vucevic led Orlando in rebounds on the night as he recorded 12 with 2 coming offensively.

On the year, the Magic are now 15-19, good enough for 2nd place in the Southeast Division.  The Magic are led in points per game by Evan Fournier, who has averaged 19.4 points per game this season. Aaron Gordon has led the Magic in rebounds per game as is averaging 7.1 per game.  D.J. Augustin is the team’s leader in assists per game and is recording 4.8 per game.  The Magic come into the game against the Heat with 3 players listed on their injury report as Michael Carter-Williams is listed as out while Aaron Gorgon and Jonathan Isaac are listed as day to day.