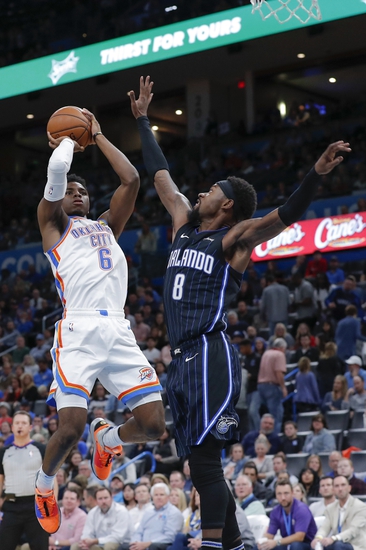 In the Thunder win over the Rockets, Oklahoma City was led throughout the game by Chris Paul.  Paul was 9 of 18 from the floor, hitting 6 foul shots, recording 28 points.  The Thunder knocked down 44% of their shots from the floor and 38% from deep.  Oklahoma City won the game from the charity stripe, out scoring Houston 20 to 12 from the line.  The Thunder trailed by 17 points in the game, before out scoring the Rockets by 21 in the 4th quarter.

In the Magic win over the Hornets, Orlando was guided offensively by Evan Fournier.  Fournier was 10 of 14 from the floor, totaling 26 points.  The Magic shot 48% from the floor and 50% from 3-point range.  The Magic out scored the Hornets inside the paint, 52 to 38.  Orlando forced 18 turnovers and secured 15 offensive rebounds, which helped the Magic attempt 16 more shots from the floor.

Thunder are 5-10 ATS in their last 15 games against Orlando.

Both teams have gone 2-2 in their last 4 games.  Oklahoma City is an average offense at best, ranking 17th in scoring offense.  The Magic have the best scoring defense to this date this season.  The Magic don't average many points and currently ranks 29th in offensive production. The Magic should be able to limit the Thunder offense, as Orlando is allowing less than 100 points when at home.  Final score prediction, Magic will win and the total goes under, 104-100.