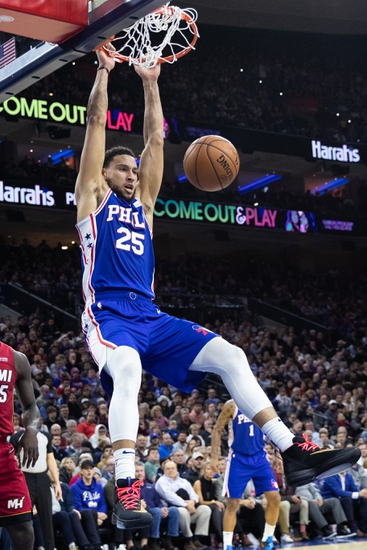 In the 76ers loss to the Heat, Philadelphia was guided throughout the game by Joel Embiid.  Embiid recorded a double-double int he loss, collecting 22 points and 19 rebounds.  The 76ers led by 10 points after the 1st quarter, but were out scored by 18 points in the 2nd quarter.  The 76ers allowed the Heat to shoot 47% from the floor, while Philadelphia made 42% from the floor.  Both teams made 12 3's and 16 foul shots.

Mavericks are 5-2 ATS in their last 7 games against the 76ers.

The under is 4-1 in Mavericks last 5 games in Philadelphia.

The Mavericks have one of the best scoring offense's in the league, averaging close to 118 per contest.  The 76ers are coming off their first home loss of the season (14-1), but the Mavericks boast a very good road record.  Dallas is (10-2) when playing on the road this year.  However, while the Mavericks have a good offense, Philadelphia has a top 5 scoring defense, allowing about 104 per game.  The 76ers defense is even better at home, allowing less than 100 points, that ranks 1st in the league.  The Mavericks also have the best road scoring offense, averaging over 120 per game.  This should be a game that comes down to the wire, but I'll side with Philadelphia.  I just can't see the 76ers losing back to back at home.  Final score prediction, the 76ers will win, 109-101.