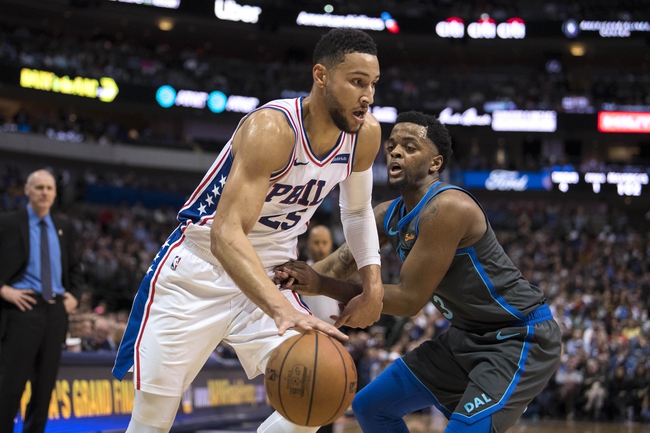 The Dallas Mavericks head to Philadelphia, PA on Friday for a game against the 76ers in a matchup of teams from the Eastern and Western Conference.  In their last game, Dallas lost to the Boston Celtics by the score of 109-103.  Kristaps Porzingis led the Mavs in points in the game as he scored a total of 23 while shooting 8 of 19 from the field.  Porzingis also led Dallas in rebounds in the game, recording a total of 13, with 3 of them coming offensively.  Jalen Brunson led the Mavericks in assists in the game against the Celtics, as he recorded 11 while playing 31 minutes on the night.

The Philadelphia 76ers welcome the Dallas Mavericks to town on Friday after losing their last game to the Miami Heat by the score of 108-104.  Joel Embiid led the 76ers in points as he scored 22 on the night while shooting 8 of 19 from the field and 5 of 5 from the free throw line.  Embiid also led the 76ers in rebounds with 19 in the game, including 8 offensively.  Ben Simmons led Philadelphia in assists in the game with 6 while playing a total of 42 minutes against the Pelicans.

With the loss against Miami, the 76ers are 20-9 on the season, which places them in 3rd place in the Atlantic Division.  Joel Embiid is the 76ers leader in points per game with 22.7 and in rebounds per game with 12.6.  Ben Simmons leads Philadelphia in assists per game and is averaging 8.1 on the season.  Philadelphia comes into Friday’s game with a clean bill of health as they do not have anyone listed on their injury report.

The Dallas Mavericks have scored 117.6 points per game on the season while allowing 109.2 points per game.  The Philadelphia 76ers have scored an average of 109.1 points per game while allowing 104.2 points per game.  Both teams are 3-2 in their last 5 games.  With Luka Doncic missing another game due to injury, I have to go with the 76ers in this one as well as the fact that Dallas is 1-4 in their last 5 games against Philadelphia.  While I believe the 76ers will come out of this one with the win, I will be looking for Dallas to cover the spread in this one as the Mavs are 12-4 against the spread in this last 16 games and have enough talent to still compete with the 76ers despite the injury to Doncic.  Philadelphia wins 105-100 but Dallas covers the spread.