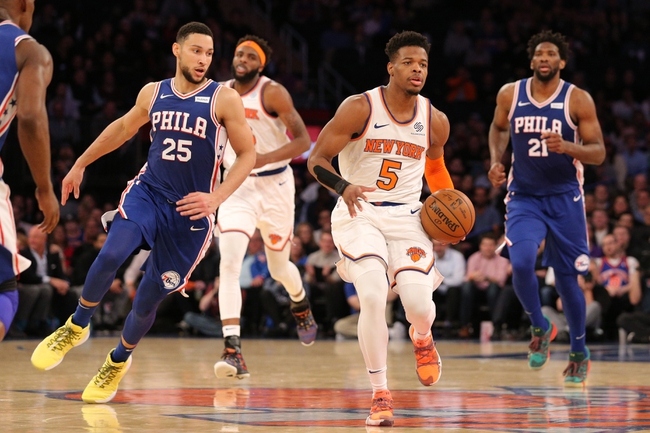 During the 76ers win of the Cavaliers, Philadelphia was guided by Tobias Harris.  Harris converted on 12 of his 14 attempts, totaling 27 points.  The 76ers shot a sizzling 55% from the floor and 39% from 3-point range.  Philadelphia was out rebounded 52 to 49.  The 76ers gave up 11 offensive rebounds, compared to their 4 offensive boards.  The 76ers forced 15 turnovers, en route to the win.

Knicks are 1-4 ATS in their last 5 vs. Eastern Conference.

The home team is 6-1 ATS in the last 7 meetings.  The Knicks have been awful on the road straight up, with a record of 1-6.  New York has been above average ATS, at 4-3 on the road.  Both defense's have looked solid on the year, ranking in the top half of the league in fewest points allowed.  The offense has been a different story, both teams have are in the bottom half of the league in points scored.  This bodes well for a total that hits the under.  The under has also cashed nicely in each teams respected situations.  Final score prediction, 76ers win and the total goes under, 108-102.