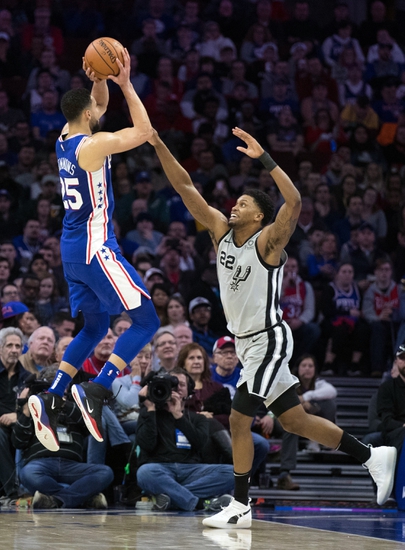 The San Antonio Spurs head to Philadelphia on Friday for a game against the 76ers in a game between the Eastern and Western Conference.  San Antonio was defeated in their last game by the Washington Wizards by the score of 138-132.  DeMar DeRozan led the Spurs in points, scoring 31 while shooting 9 of 13 from the field and 13 of 17 from the free throw line.  Lamarcus Aldridge led San Antonio in rebounds on the night with 10 including 3 offensively.  Bryn Forbes led the Spurs in assists in the game as he totaled 7 while playing 33 minutes in the game.

San Antonio is now 5-10 on the season and are currently in 5th place in the Southwest Division.  DeMar DeRozan leads the Spurs in points per game with 21.7. DeRozan is also leading San Antonio in assists per game as he is averaging 4.8.  Trey Lyles has been the Spurs most productive rebounder and has averaged 7.2 per game this season.  The Spurs come into Friday’s game with just 1 player listed on their injury report as Derrick White is listed as day to day.

The Philadelphia 76ers welcome the San Antonio Spurs on Friday after winning their last game 109-104 against the New York Knicks. Joel Embiid led the 76ers in points as he scored 23 on the night while shooting 7 of 19 from the field and 8 of 12 from the free throw line.  Embiid also led the 76ers in rebounds with 12 in the game, including 2 offensively.  Ben Simmons led Philadelphia in assists in the game with 13 while playing 42 minutes.

After the win, the 76ers are now 9-5 on the season, which places them in 3rd place in the Atlantic Division.  Joel Embiid is the 76ers leader in points per game with 22.9 and in rebounds per game with 11.5.  Ben Simmons leads Philadelphia in assists per game and is averaging 7.6 per game on the season.  Philadelphia leads comes into Friday’s game with 3 players listed on their injury report as Marial Shyok, Josh Richardson and Trey Burke are all listed as day to day.