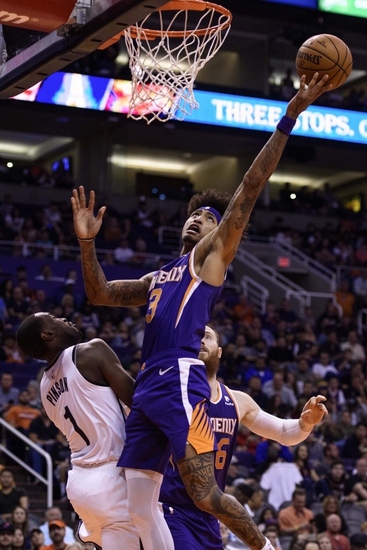 Phoenix is off to its best start since the 2009-10 season and it has been thanks to its 3-point shooting. The Suns have hit 11 or more 3-point buckets in seven straight games -- a franchise record -- and will look to continue that run at home against the Lakers. The matchup should prove to be an interesting one considering that the Lakers allow the third-least points off of 3-pointers this season at just 29.3 per game.

The Suns have been a complete surprise, holding wins over teams such as the Clippers and Philadelphia with losses only to NBA elite teams such as an overtime loss to Denver, a one-point loss to Utah, and a defeat to Miami last Thursday. Phoenix, ranked No. 5 in the NBA on offense, has been led by Devin Booker and his 25.8 points per game. Deandre Ayton is averaging a double-double with 18.0 points and 11.0 rebounds per game Kelly Oubre Jr. averages 17.2 points, Aron Baynes scored 15.8 points, and Ricky Rubio adds 13.6 points, 8.6 assists, and 6.8 rebounds per game.

That elite offense will take on the Lakers’ elite defense, which currently sits third in the NBA allowing just 100.1 points per game. But that defense might be without Anthony Davis, who re-injured his shoulder blocking a shot on Sunday. Davis continued to play against Toronto, and is listed as probable for Tuesday, but could still miss time if the Lakers feel that move would benefit them long term.

While Davis has been amazing in the early going with the Lakers, averaging 26.6 points and 10.2 rebounds per game, it has been LeBron James who has been even more incredible. James has four triple-doubles this season and continues to roll for a team that no longer depends on him to score the majority of the points for the team. James is averaging 24.6 points, 11.0 assists, and 8.3 rebounds on the season. Only two other Lakers average in double-figures with Avery Bradley adding 10.3 points and Kyle Kuzma contributing 10.2 points per game.

Some may simply be waiting for the Phoenix bubble to pop, not believing that this team is for real, but it only makes sense to ride the Suns until that happens, if ever. Phoenix is the best team in the NBA against the spread this season, covering the numbers eight out of nine games in 2019-20. In addition, Phoenix is 2-0 at home as the underdog. The Lakers are good against the spread at 6-3, but they are just 1-2 as a road favorite this year. Run with the Suns until they burn you. Take the points.