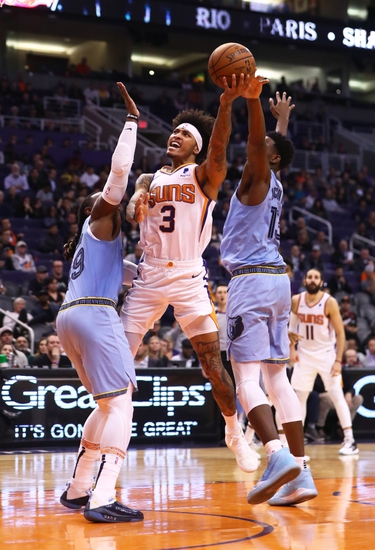 In the Suns win over the Knicks, Phoenix was lld on offense by Devin Booker.  Booker collected 38 points, 3 rebounds, and 7 assists.  The Suns shot 47% from the floor and 36% from 3-point range.  Phoenix was out rebounded in the loss, 52 to 48.  The Suns were able to get by with the win, thanks to out scoring the Knicks at the foul line by 6.  Phoenix dominated New York on points off of turnovers, 20 to 4.

The over is 19-16 in Grizzlies games this year.

The Grizzlies have one of the worse scoring defense's in the league, giving up over 116 per game.  This does not work well in a matchup that pairs the Grizzlies with the 6th best scoring offense in the league.  The Suns are averaging over 114 points per contest.  Phoenix also has the 4th best free throw percentage in the league.  Offensively, Memphis should find some success, as Phoenix ranks 26th in scoring defense.  The Suns are giving up an average of 115 per game.  Neither defense is solid and with both players having talent on the offensive end, I'll take the over.  Final prediction, Suns will win and the total goes over.