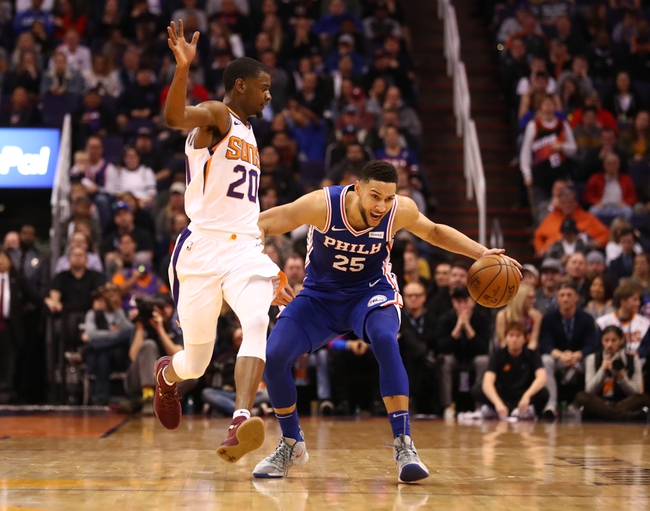 The Philadelphia 76ers take their perfect record of 95-0) on the road to face the Phoenix Suns (4-2).  The 76ers are coming off a nail biting 129-128 victory on the road against the Portland Trail Blazers.  The Suns are also coming off a win, the Suns won a the Memphis Grizzlies 114-105 in their last game.

The Phoenix Suns were guided by Andrew Baynes in the win over the Grizzlies.  Baynes was 4 of 7 from deep, while totaling 20 points and 4 assists in the game.  Devon Booker also helped out, Booker had a nice game with 21 points and 2 assists.  Ricky Rubio added 6 assists and 11 points in 35 minutes of playing time.  The Suns led by as many as 16 points in the game.  The Suns were out scored in the paint 62 to 48.  The Suns defense held the Grizzlies to just 32% from behind the arch.

Suns are 6-0 ATS in their last 6 games overall.

The favorite is 24-8 ATS in the last 32 meetings between the two teams.  The road team is 4-0 ATS in the last 4 meetings. The 76ers will be without Joel Embiid in this one, as he finishes serving his 2 game suspension.  Even with Embiid out, I like the 76ers in this spot.  The road team has been profitable in this situation, but I also like the mismatch the 76ers will have with the Suns big man out, DeAndre Ayton serving his long suspension.  Final score prediction, 76ers win and cover, 109-106.