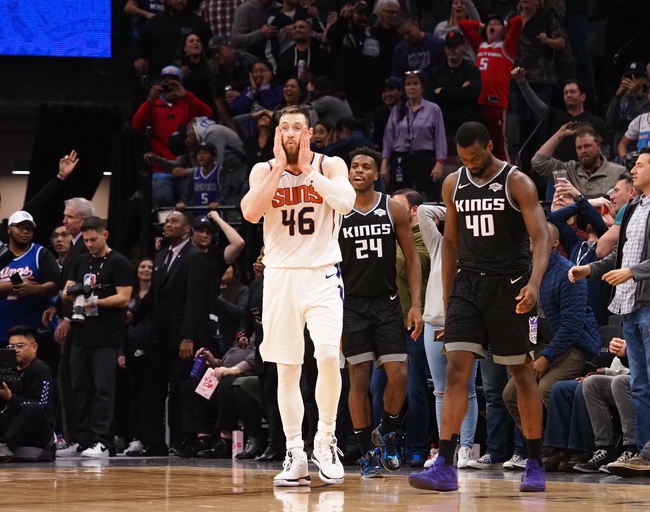 In the Kings loss to the Pelicans, Sacramento was guided on offense by Harrison Barnes.  Barnes converted on 9 of 12 attempts, making 10 foul shots, recording 30 points.  The Kings shot 44% from the floor and 57% from distance.  Sacramento took the loss, due to their inability to defend the 3.  The Kings gave up 16 3-pointers to the Pelicans.  Sacramento led by 9 points in the game.

In the Suns loss to the Grizzlies, Phoenix was led on offense by Devin Booker.  Booker hit on 13 of 20 attempts from the floor, sinking 13 free throws, registering 40 points.  The Suns shot 45% from the floor and 23% from distance.  The Suns were dominated from behind the arch.  Phoenix allowed Memphis to connect 18 times from deep.  the Suns made just 6 3-pointers.  Phoenix led by 11 points in the game.

Suns are 4-1 ATS in their last 5 games overall.

Suns are 0-4 ATS in their last 4 Tuesday games.

The Kings are 1-4 ATS in their last 5 matchups with the Suns. The Kings have been in a rough patch, having lost 9 of their last 10 games.  The Suns have won 3 of their last 5 matchups.  Bogdan Bogdanovic is listed as doubtful for Monday nights matchup.  If Bogdanovic is out for this contest, it will be even more difficult for the Kings to generate points off the bench.  Bogdanovic is averaging 14.5 points and 3 rebounds.  The Suns are averaging nearly 117 points when at home.  I'll side with Booker and company to get the job done at home. Final score prediction, Suns will win and cover, 113-105.