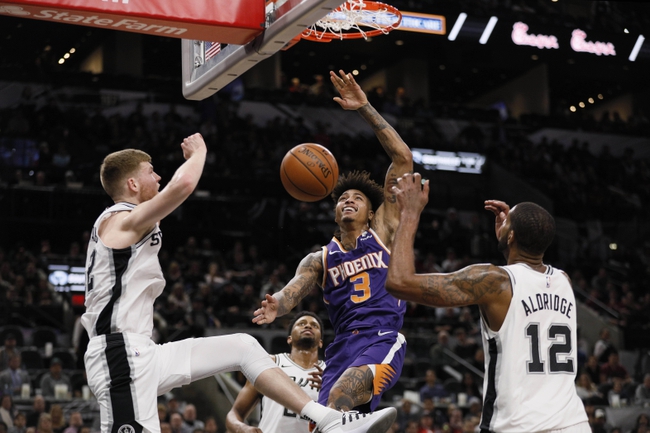 In the Spurs loss to the Cavaliers, San Antonio was led on offense by LaMarcus Aldridge.  Aldridge collected a double-double in the loss, finishing with 18 points and 10 rebounds.  The Spurs shot 49% from the floor and 31% from 3-point range.  San Antonio took the loss, thanks to their 3-point defense.  The Spurs allowed the Cavaliers to make 15 shots behind the arch, compared to the Spurs 5 makes.  The Spurs had 7 blocked shots defensively.

In the Suns loss to the Grizzlies, Phoenix was guided during the game by Kelly Oubre Jr.  Oubre secrued a double-double on the night, recording 14 points and 13 rebounds.  The Suns shot 40% from the floor and 26% from 3-point range.  The Suns allowed the Grizzlies to shoot 48% from the floor.  Phoenix finished the game with an assist to turnover ratio of, 29 to 12.

Spurs are 0-4 ATS in their last 4 games when facing a team with a SU losing record.

Suns are 9-4 ATS in their last 13 games following a SU loss.

Suns are 4-0 ATS in their last 4 Saturday games.

The Spurs are 2-8 this season when pegged as the underdog.  The Spurs have controlled this series lately, having won 8 of the last 10 games.  Defensively, both teams are rather comparable, as each team is giving up between, 114-115.5 per night.  The Spurs have not been great ATS recently, while the Suns have been profitable ATS after a loss.  I'll give the edge to the Suns.  Final score prediction, the Suns will win and cover, 115-110.