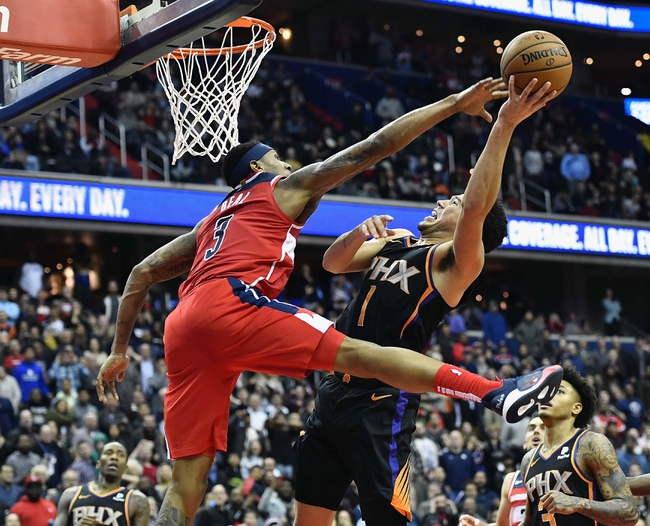 The Washington Wizards head to Phoenix on Wednesday for a game against the Suns, but first must play against the Denver Nuggets on Tuesday night.  In their last game, the Wizards were defeated by the Sacramento Kings by the score of 113-106.  Bradley Beal scored a team high 20 points while going 8 of 18 from the field and 2 of 2 from the free throw line.  Beal also led Washington in assists on the night with 8 while playing 41 minutes in the game.  Mortiz Wagner led the Wizards in rebounds with 11, with 3 coming offensively.

The Phoenix Suns welcome the Washington Wizards into town on Wednesday after winning their last game by the score of 116-104 against the Denver Nuggets.  The Suns were led in scoring by Cheick Diallo who scored 22 points while shooting 10 of 12 from the field and 2 of 2 from the free throw line.  Dario Saric led the Suns in rebounding as he recorded 17 which all came defensively.  Devin Booker led the Suns in assists in the game with 5 while playing a total of 33 minutes.

With the win against Denver, the Suns are 8-8 and are currently in 3rd place in the Pacific Division.  The offense for the Suns is led in scoring by Devin Booker who is currently averaging 24.8 points per game.  Booker is also leading the Suns in assists per game with 6.1.  Dario Saric leads the Suns in rebounding as he is averaging 6.6 per game.  The Suns enter Wednesday’s game with 3 players listed on their injury report as Ty Jerome, Ricky Rubio and Aron Baynes are all listed as out.