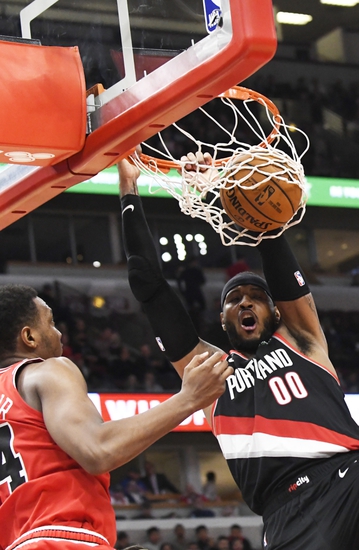 Portland will hope that the addition of Carmelo Anthony to its roster will continue to bring success when the Trail Blazers (6-12) host the Oklahoma City Thunder (6-10) at Moda Center on Wednesday. Portland is coming off of a 23-point win over Chicago on Monday when Anthony led his team with 25 points, marking the Trail Blazers’ first win in five games.

Portland is a team that came into the season with high hopes and one of the best players in the league in Damian Lillard, but the season has not gone its way as the Trail Blazers have won just three of their last 13 games. But the signing of Anthony and his recent performance against Chicago gives Portland fans hope that their team may be turning the corner, albeit way behind in the Western Conference playoff race.

Anthony was dominant against the Bulls, scoring 25 points on 4-of-7 shooting to go along with eight rebounds, while Lillard scored just 13 points but added 12 assists, showing the early chemistry between the two star players. CJ McCollum added 21 points, Rodney Hood scored 16 points, Hassan Whiteside added 13 with 12 rebounds, and Skal Labissiere scored 12 points off the bench.

After trading away Russell Westbrook and Paul George, Oklahoma City must have known that this year would probably be a year of transition. And that it is. Despite some solid play from Shai Gilgeous-Alexander and Danilo Gallinari, who the Thunder acquired in the George deal, as well as leadership from Chris Paul, who they acquired in the Westbrook deal, it is still just good enough for a 6-10 record.

Despite winning just two of their last eight games, Oklahoma City will hope to start just its second winning streak of the year after knocking off Golden State 100-97 on Monday for its first road win of the season. Dennis Schroder led the Thunder in scoring coming off the bench for 22 points on 4-of-8 shooting from 3-point range, while Paul had identical numbers from long range in scoring 20 points with seven rebounds and five assists. Gallinari added 15 points, seven rebounds, and six assists while Gilgeous-Alexander scored 12 points in the win.

Taking the Trail Blazers to win, let alone to win by 4.5 points, might seem crazy, but it is the play here. Portland already beat Oklahoma City this season on the road by three, and that was before Anthony joined the team. If Portland can replicate its offensive output on Wednesday that it did on Monday against Chicago, it should be a runaway. Take Portland minus the points and put your trust in Anthony to continue to mesh with Lillard and McCollum in the Pacific Northwest.