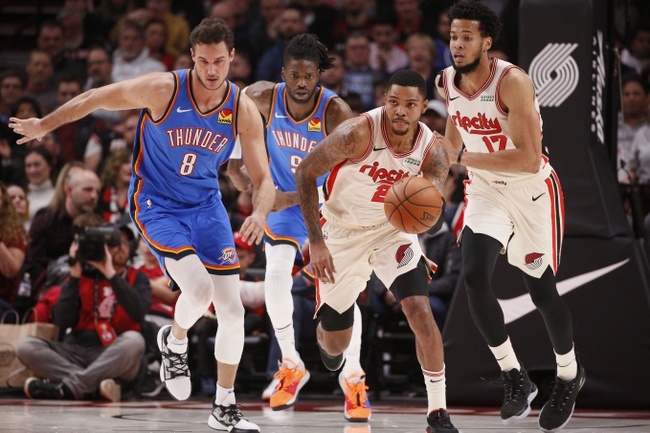 The Oklahoma City Thunder are on the road for a contest with the Portland Trail Blazers.  The Thunder are (9-12), coming off a 139-127 win over the Minnesota Timberwolves.  The Trail Blazers are (9-14), after falling 136-116 to the Los Angeles Lakers.

In the Thunder win over the Timberwolves, Oklahoma City was guided on offense by Chris Paul.  Paul connected on 11 of his 20 attempts from the floor, making all 7 foul shots, totaling 30 points and 7 assists.  The Thunder trailed by 5 points at the half, but tied it up in the 2nd half to send the game to OT.  The Thunder dominated the extra frame, out scoring Minnesota 17 to 5.  The Thunder shot 55% from the floor and 28% from distance.  Oklahoma City forced 13 turnovers in the win.

In the TrailBlazers loss to the Lakers, Portland was led on offense by Damian Lillard.  Lillard converted on 9 of 18 attempts from the floor, making 9 of 11 from 3-point range, registering 29 points and 8 assists.  The Trail Blazers shot 45% from the floor and 29% from deep.  Portland was smoked on the boards, being out rebounded 56 to 40.  The Trail Blazers gave up 17 3-point shots in the loss.

OKC is 1-6 SU in their last 7 against Portland.

Portland is 4-1 ATS in their last 5 games against the Northwest division.

Portland is 3-6 ATS in their last 9 games in December.

The thunder are 13-8 ATS thus far, while the Trail Blazers have not been profitable, 10-12-1.  Portland has won 4 of their last 6 matchups and seem to be getting their situation figured out.  I'v said this since the beginning of the season, this team has to much talent, to have a losing record.  Oklahoma City has struggled on the road, going just 2-7.  Portland beat the Thunder back on November 27th, 136-119.  Final prediction, the Trail Blazers get the job done at home.