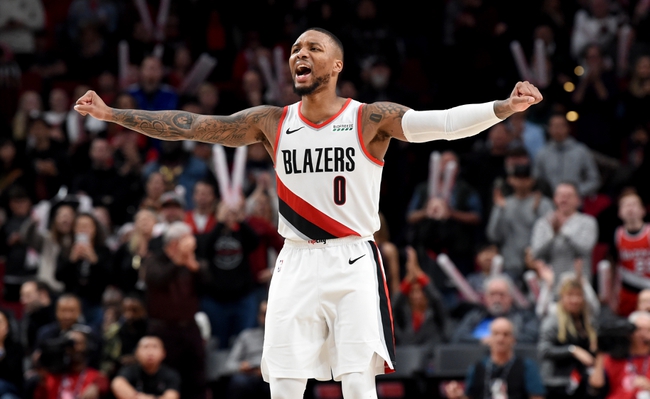 The Portland Trail Blazers head to Sacramento on Tuesday, for a matchup with the Kings in what should be a good game between two teams in the Western Conference.  In Portland’s last game, they were able to pull out a win against the Atlanta Hawks by the score of 124-113 in overtime.  Damian Lillard led the way for the Trail Blazers scoring 30 points while going 8 of 17 from the field and 11 of 12 at the free throw line.  Lillard also led his team in assists with 6 but did also turn the ball over 4 times. Center Hassan Whiteside led the Trail Blazers in rebounds with 12 and added 21 points of his own.

The Trail Blazers enter Tuesday game with a record of 4-6 and are in 4th place in the Northwest Division.  The win against Atlanta snapped a 4 game losing streak for Portland.  Portland is led by point guard Damian Lillard who is averaging a team leading 33 points per game on the season. Lillard is also the team leader in assists and is averaging 6.8 assists per game. Hassan Whiteside leads the Trail Blazers in rebounding and is averaging 13.1 per game.  The Trail Blazers enter Tuesday’s game with 2 players listed on their injury report as Pau Gasol is listed as out and Rodney Hood is day to day.

The Sacramento Kings welcome the Portland Trail Blazers to town after winning their last game against the Atlanta Hawks by the score of 121-109.  Buddy Hield was the main offensive weapon for the Kings as he led the team in points with 22 while shooting 9 of 17 from the field and 1 of 1 from the free throw line. De’Aaron Fox the Kings in assists with 9 on the night while also committing 5 turnovers. Richaun Holmes was the Kings’ leading rebounder, pulling in 9 rebounds on the night, including 2 coming while on offense.

With the win, the Kings are now 3-6 and are currently in 4th place in the Pacific Division. De’Aaron Fox is leading Sacramento in points per game on the season with 18.2 and in assists with 7 per game.  Richaun Holmes has been the Kings leader in rebounds per game with 7.  The Kings enter Tuesday night’s game with 3 players listed on their injury report as Harry Giles III and Marvin Bagley III listed as out while De’Aaron Fox is listed as day to day.