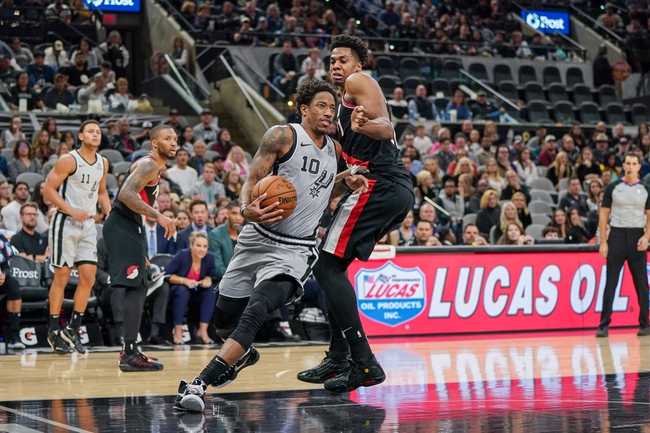 In the Spurs loss to the Lakers, San Antonio was guided throughout the game by DeMar DeRozan.  DeRozan collected 28 points, 9 rebounds, and 7 assists.  The Spurs shot 44% from the floor and 48% from 3-point range.  The Spurs allowed the Lakers to hit 59% of their shots. San Antonio was smoked on the boards, being out rebounded 59 to 28.

In the Trail Blazers loss to the Nuggets, Portland was led offensively by Damian Lillard.  Lillard finished with 21 points, 2 rebounds, and 9 assists.  The Trail Blazers connected on 40% from the floor and 29% from 3-point distance.  Portland lost the game from behind the 3-point arch, allowing the Nuggets to connect 17 times.   The Trail Blazers were out scored from distance, 51 to 27.

Spurs are 4-2 ATS in their last 6 games against the Western Conference.

Trail Blazers are 4-1 ATS in their last 5 games.

Trail Blazers are 5-2 SU in their last 7 games.

I was high on the Trail Blazers when the season started and was shocked to see them get off to the start they did.  Portland has a solid starting lineup that underperformed at the beginning of the season.  Even with some injuries, the Trail Blazers seem to be finding some traction as the season reaches towards the All-Star break.  Portland has won 5 of their last 7 and saw their 4 game win streak come to an end against the Nuggets.  The Trail Blazers have done well recently with wins over: Utah, LAL, HOU, and IND.  The Spurs are 8-16 on the road.  I'll side with the Trail Blazers offense to get it done at home, against an average defense at best.  Final score prediction, Trail Blazers will win and cover, 117-112.