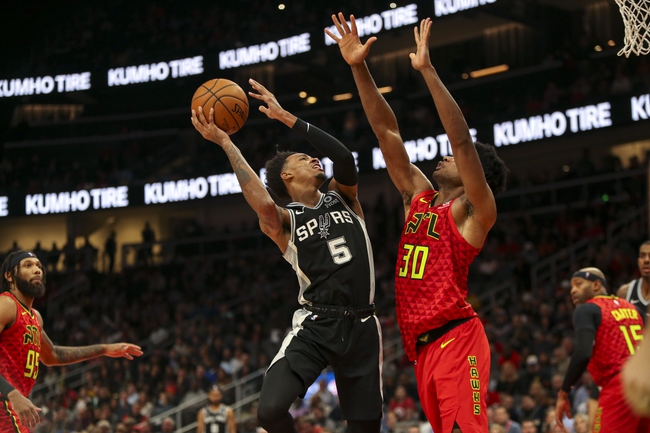 In the Spurs loss to the Heat, San Antonio was guided offensively by DeMar DeRozan.  DeRozan connected on 12 of 14 attempts from the floor, knocking down 6 free throws, finishing with 30 points and 7 assists.  The Spurs shot 44% from the floor and 30% from deep.  San Antonio lost the game, due to their 3-point defense.  The Spurs allowed the Heat to convert 17 times from distance.  San Antonio made just 10 3-pointers.

Hawks are 5-1 ATS in their last 6 games against the Western conference.

Spurs are 6-1 ATS in their last 7 games against the Eastern conference.

The Hawks beat the Suns in their last game, which snapped their 4 game losing skid.  The Spurs have won 3 of their last 5 overall.  The Hawks have been one of the worse teams on the road, having gone 4-18 to this point.  The Spurs are 11-9 at home, which isn't a great record, but none the less the Spurs have a winning record at home.  Neither defense has shown the ability to stop opposing teams on a consistent basis, as each team ranks 26th and 28th in scoring defense.  The Spurs are giving up nearly 115 and the Hawks are allowing almost 117 per game.  Atlanta is on the road and the Hawks have not been good when on the road.  The Spurs also have the better offense and defense, I'll side with the Spurs. Final score prediction, Spurs will win and cover,