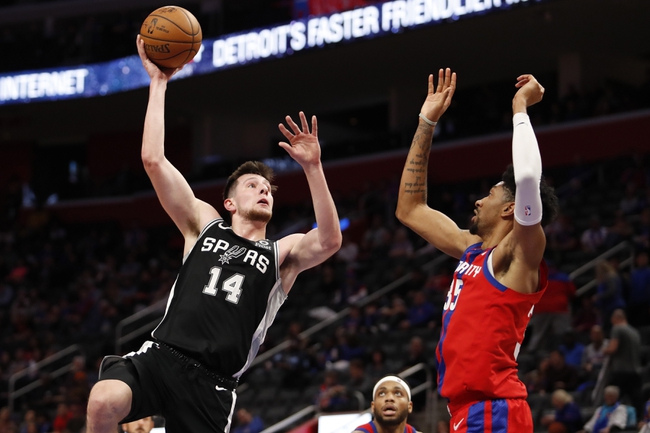 The Detroit Pistons go to San Antonio, Texas, to take on the San Antonio Spurs on Saturdays at the AT&T Center. The Detroit Pistons are coming off of a win over the Washington Wizards, that snapped a five-game losing streak that they were on. The Pistons blew out the Wizards by 30 points, and it may help the Pistons confidence going forward.

The Detroit Pistons are 12-20 on the season and have not had a great year. There was some potential that the trio of Derrick Rose, Blake Griffin, and Andre Drummond would create a playoff-type team for Detroit, but at the moment it doesn't look to be the case. The Pistons are dealing with two injuries to their team at the moment, with Luke Kennard and Blake Griffin go out with injuries.

The San Antonio Spurs are coming off of a loss to the Dallas Mavericks. The Spurs lost to the rival Mavericks, without the Mavericks having Luka Doncic, which can be seen as a disappointing loss. However, the Detroit Mavericks have done a terrific job without Luka Doncic this season, and are simply one of the best teams in basketball.

The Spurs are 12-18 on the season and have been very up-and-down as of late. The Spurs are still searching for who they are going to become this season. There's a lot of people suggesting that the Spurs should begin to rebuild and trade the likes of DeMar DeRozan and LaMarcus Aldridge for future assets. However, the Spurs have not missed the playoffs in over 20 years, and will possibly be trying to continue that streak while Gregg Popovich is still the coach.

Spurs are 4-1-1 ATS in their last six games overall.

The Pistons coming off of a win could be strolling in this game with some confidence, and they have already beaten the Spurs this year. However, I still think that the Spurs are the better team. However, the Pistons struggle to get wins at the AT&T Center, as they are 3-7 ATS in the last ten meetings. I think the Spurs continue to dominate the Pistons at home, and they get back to their wins. Final Score Prediction, San Antonio Spurs win 113-105.