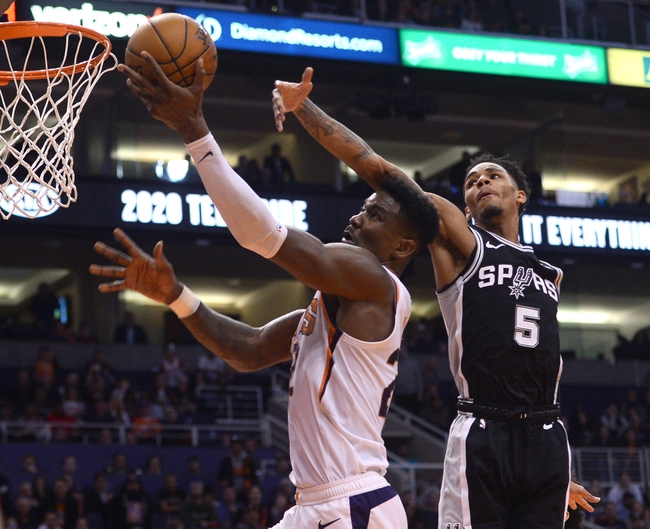 The Phoenix Suns are 18-27 on the season and are just a few games back from the eighth seed in the Western Conference. The Suns will likely be without Aaron Baynes and Cam Johnson, which may change the gameplay for the Suns, especially defensively.

The San Antonio Spurs are coming off of a win over the New Orleans Pelicans, defeating the Pelicans on Zion Williamson's debut, despite Williamson scoring 17 points in just three minutes.

The San Antonio Spurs are now on a three-game win streak, defeating the Miami Heat and the Phoenix Suns themselves in the process. The Spurs have won six of their last ten games.

The San Antonio Spurs are 20-23 on the season and are 12-10 at home this season. The San Antonio Spurs team isn't like most Spurs teams in the past, as they've done relatively well on offense, ranking eighth in points per game, but are 26th in points allowed per game, as they are struggling to defend, which is not a normal trait for a Gregg Popovich team to struggle with. However, it looks like the Spurs may have turned a new leaf and might be back to their playoff-contending ways.

This is a matchup of two teams that have played very similarly this season. The Suns and Spurs averaged nearly the same amount of points and allowed nearly the same amount of points. However, it does feel like this Antonio Spurs have maybe improved, and are headed in the right direction, while the Phoenix Suns are a little stagnant and are complacent at where they are at the moment. I think that the Suns have more talent on their roster, but they haven't figured out a way to mold all of their player's abilities just yet. I think this game will be ridiculously close, but ultimately the San Antonio Spurs will win at home. Final Score Prediction, San Antonio Spurs win 115 - 110.