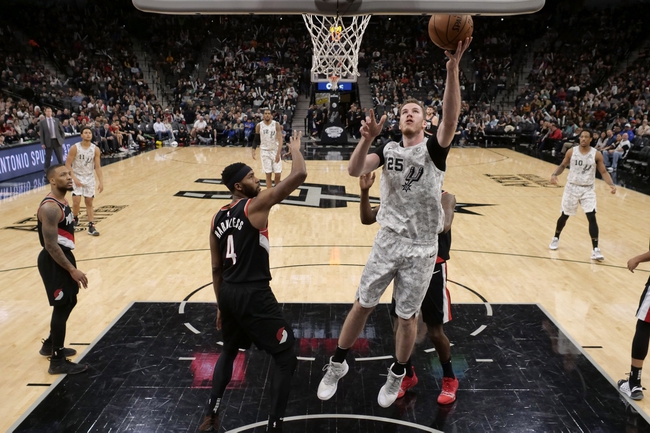 The Portland Trailblazers enter this road contest with a record of (2-1) and play the host San Antonio Spurs (2-0).  The Trailblazers are coming off a 121-119 road win at the Dallas Mavericks.  The Spurs will hope to open the season with 3 straight wins at home.  The Spurs last time out, beat the Wizards 124-122.

The Trailblazers were led offensively in the game by CJ McCollum.  McCollum was 13 of 26 shooting and totaled 35 points in the win.  Damian Lillard was second on the team with 28 points, while contributing 5 assists.  Shooting guard Rodney Hood added 20 points and 6 rebounds.  The Trailblazers as a team shot over 51% from the floor and 41% from 3 point range.

San Antonio was guided by LaMarcus Aldridge, with 27 points and 9 rebounds.  Aldridge was 10 of 17 from the floor in 33 minutes.  Demar Derozen was 11 of 24 shooting, totaling 26 points in the game.  Dejounte Murray contributed a double-double in the game, netting 19 points and grabbing 10 rebounds.  The Spurs had a great assist to turnover ratio of 29/9. The Spurs blocked 7 shots defensively in the win.

The Trailblazers are 2-0 ATS on the road this season.

The Spurs are 0-2 ATS this season.

Neither team has had trouble scoring points this season and both defenses rank in the lower half of the NBA in points allowed.  With both teams giving up as many points as each team scores, this should be a high scoring game.  The over has been profitable in recent games for both teams as well.  The Spurs rank 26th in opp 3 point percent, giving up a success rate of over 40%.  Look for McCollum and Lillard to have a good success rate from deep. The Trailblazers rank 23rd in defending the 3.   Final score prediction, Trailblazers win and the total goes over 114-111.