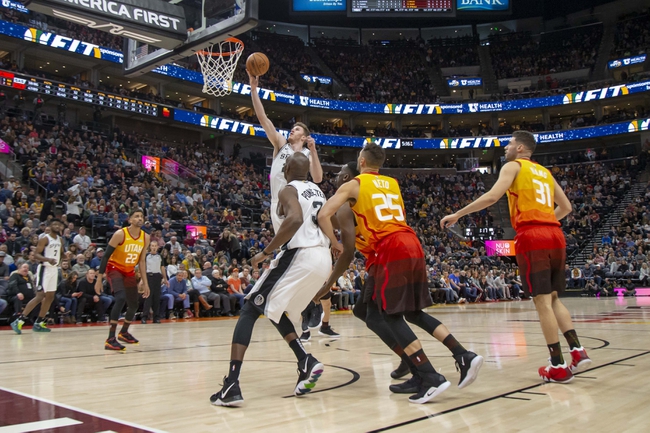 The Utah Jazz goes to San Antonio, Texas, to take on the San Antonio Spurs at the AT&T Center on Wednesday. The Jazz is coming off of a loss to the Houston Rockets, that loss snapped a four-game winning streak. The Utah Jazz has been incredible lately, winning eight in their last 13 games this month.

The Utah Jazz is 32-14 on the season and is 14-10 on the road, finding it much harder to win away from their home arena. The Jazz is fourth in the Western Conference, but are tied with the Denver Nuggets who are in the third spot. If everything works out for the Jazz, a win could bring them all the way up to the second seed on Friday. The Jazz has a decent offense but has excelled on the defensive end, ranking sixth in the NBA in points allowed per game.

The San Antonio Spurs are coming off of a three-game losing streak, losing to the Phoenix Suns, Toronto Raptors, and the Chicago Bulls. Despite the Spurs losses, they have played every game very tight, losing each of their last three games by four points or less.

The San Antonio Spurs are 20-26 on the season and are .500 at home with a 12-12 record. The Spurs are two games back from the Memphis Grizzlies for the final playoff spot in the Western Conference. The Spurs have done very well at scoring and rebounding this season, but have been uncharacteristically bad on defense this season.

The Utah Jazz has been extremely good this season and has been incredible as of late. The Jazz will likely be playing at an extra high level, as they attempt to get Donovan Mitchell and Rudy Gobert into the NBA All-Star Game. The way that the Jazz have been playing, and with the last few games before the All-Star Game, you could see another level of play by Gobert, who everyone knows deeply wants an All-Star game selection. I think that desire and the hot streak the Jazz are still on despite the loss, will give them another win. Final Score Prediction, Utah Jazz win 115-108.