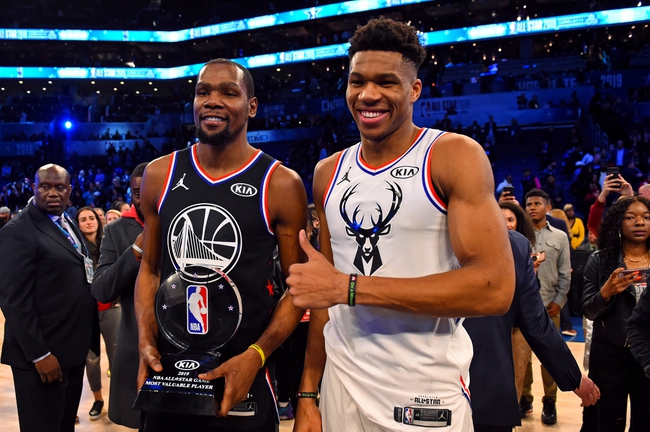 Team LeBron and Team Giannis meet Sunday in the 2020 NBA All-Star Game at the United Center.

Team LeBron is absolutely stacked and it’s amazing how for the second year in a row he’s able to get so many of the leagues top players. The starting five includes LeBron, Kawhi Leonard, Anthony Davis, Luka Doncic and James Harden. You could argue Team LeBron has four of the top-six players in the league in its starting five. As for the bench of Team LeBron, players such as Ben Simmons, Jayson Tatum, Russell Westbrook, Nikola Jokic and Chris Paul will give it a go. Damian Lillard had to pull out due to a groin injury, so the previously snubbed Devin Booker was called up for his first career all-star appearance. There’s no weaknesses with Team LeBron, and having a guy such as Westbrook coming off the bench is huge, as he’s on of the few guys in the league who still plays this glorified exhibition seriously.

Team Giannis lacks the top tier star power that its opponent has, but you could do a lot worse than a starting five of Antetokounmpo, Joel Embiid, Pascal Siakam, Kemba Walker and Trae Young. The bench includes Bam Adebayo, Jimmy Butler, Rudy Gobert, Kyle Lowry, Brandon Ingram, Donovan Mitchell and Khris Middleton. Team Giannis has great length and a lot of defensive bodies, so this squad could surprise some people if they actually decided to play hard and put effort on the other end of the court. While Team LeBron features a ton of the top names in the league, it’s Team Giannis that has an identity and could probably play better together if they actually lock in defensively. This club can throw out five or six of the defensive players in the league, so don’t write this team off just yet.

As for handicapping this game, it’s tough to predict given the new format and the scores resetting at halftime and then playing to 24 points in the fourth quarter. It throws a wrench into everything due to the unpredictability. However, maybe players actually give some effort for all four quarters now that there’s serious charity money on the line and they’re supposed to be playing in honor of Kobe Bryant and his daughter Gianna Bryant. If that’s the case, you’d have to like Team Giannis to at the very least keep this thing competitive with so many top defenders to throw out there and the size of the bigs on the roster.

Regardless, I usually lean toward free points in all star games, as they’re unpredictable, meaningless for the most part and defense is optional for at least three quarters. I’m not trying to lay chalk in a game where guys watch the other team score for 45 of 48 minutes. Like every year, give me the points.