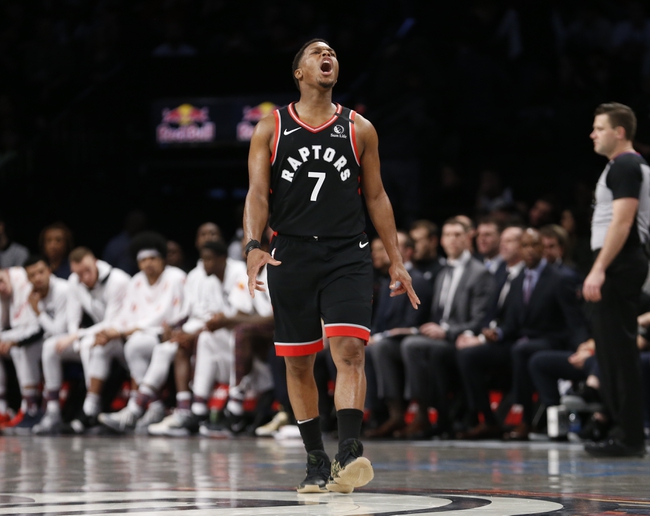 The Brooklyn Nets travel to Toronto, ON on Saturday for a game against the Raptors in a matchup of teams from the Atlantic Division in the Eastern Conference.  In their last game, the Nets defeated the Golden State Warriors by the score of 129-88.  Caris LeVert led the Nets in points in the game against the Warriors, scoring 23 while shooting 8 of 20 from the field and 4 of 4 from the free throw line.  LeVert also led the Nets in assists as he recorded 8 while playing 27 minutes on the night.  Jarrett Allen was the Nets leading rebounder in the game as he recorded 13 boards, including 3 offensively.

The Toronto Raptors welcome the Brooklyn Nets to town on Saturday, but first must play the Indiana Pacers on Friday night.  In their last game, the Raptors defeated the Indiana Pacers by the score of 119-118.  Kyle Lowry led the Raptors in scoring on the night with 32 points while shooting 12 of 21 from the field and 5 of 5 from the free throw line.  Lowry also led the Raptors in assists with 10 while playing a total of 38 minutes in the game against Indiana.  Pascal Siakam was the leading rebounder on the night for Toronto as he pulled in a total of 9 boards, with 1 coming offensively.

After the win against Indiana, Toronto is now 37-14 on the season which places them in 1st place in the Atlantic Division.  Pascal Siakam has been the leading scorer this season for Toronto as he has averaged 23.7 points per game on the year.  Serge Ibaka has been the leading in rebounding this year for the Raptors as he has pulled in an average of 8 rebounds per game, including an average of 2.1 coming offensively.  Kyle Lowry has led Toronto in assists this season with an average of 7.3 assists per game on the year.  Toronto enters Saturday’s game against the Nets with 5 players on their injury report as Normal Powell, Dewan Hernandez, Malcolm Miller and Marc Gasol are out while Oshae Brissett is listed as day to day.