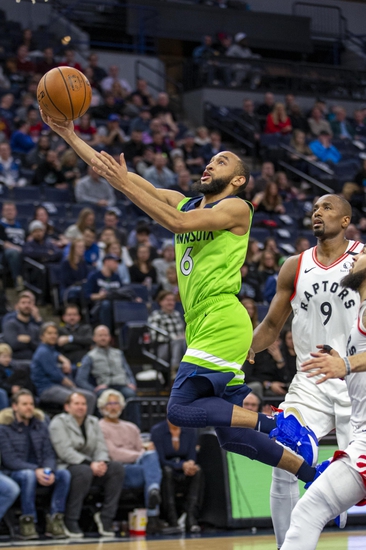 In the Raptors win over the Nets, Toronto was guided throughout the game by Fred VanVleet.  VanVleet collected 29 points, 2 rebounds, and 6 assists.  The Raptors converted on 47% from the floor and 40% from distance.  Toronto forced 9 turnovers in the win, which helped the Raptors attempt 3 more shots than the Nets, in what was a nail biting game.

Timberwolves are 1-9 ATS in their last 10 games.

Timberwolves are 3-14 SU in their last 17 games against Toronto.

The over is 5-1 in Timberwolves last 6 games against the Eastern conference.

Raptors are 5-2 ATS in their last 7 games against the Northwest Division.

The over is 7-3 in Raptors last 10 games against Minnesota.

The Timberwolves have not looked great recently.  The Timberwolves did snap a huge losing skid with the win over the Clippers.  The Clippers traded away Andrew Wiggins and Robert Covington this past week, which will put a damper on the outside game a bit.  Minnesota has struggled this season shooting behind the 3-point arch and it will not help their cause trading away these two.  Toronto has won their last 10 and have things rolling in the right direction.  The Raptors have a top 5 defense, Toronto should have no issue getting a win and cover at home.  Final score prediction, Raptors will win and cover, 121-106.