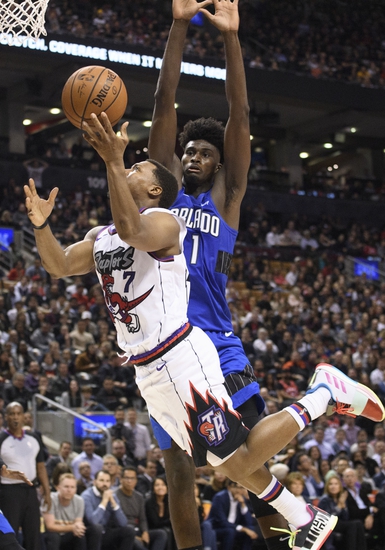 In the Magic's win over the Wizards, Orlando was led by Nikola Vucevic.  Vucevic has made 11 of his last 14 attempts, totaling 30 points.  The Magic shot 49% from the floor, while the Wizards shot 47%. Orlando smoked Washington on the glass, out rebounding the Wizards 57 to 42.   The Magic had 25 assists to 14 turnovers in the game.  Orlando had a lead of 18 points, before the Washington started to attempt their comeback.

In the Raptors win over the Hornets, Toronto was carried by OG Anunoby.  Anunoby was 10 of 13 from the floor, registering 24 points.  The Raptors shot 51% from the floor and 46% from distance.  Toronto demolished the Hornets inside the paint, out scoring Charlotte 58 to 30.  The Raptors led by 4 points at the half, but used a huge 2nd half to pull away from the Hornets.

The Raptors have controlled the series against the Magic, winning 7 of the last 10 meetings.  The defense has been the story for both of these teams.  Orlando ranks 3rd in fewest points allowed at under 102 per game.  The Raptors are giving up 106 per game on the year.  The Raptors have been perfect at home this season, winning all 5 of their home matchups.  Toronto is also 7-0 as the favorite this year, while being 4-1 ATS at home.  The area that Toronto will be able to take advantage is, the 3-point defense of Orlando.  The Raptors have the highest 3-point offensive shooting percentage in the league.  The Magic have the 12th best 3-point defense.  There is a enough of a gap to where this can make the difference in Toronto covering the spread.  Final score prediction, Raptors cover 108-102.