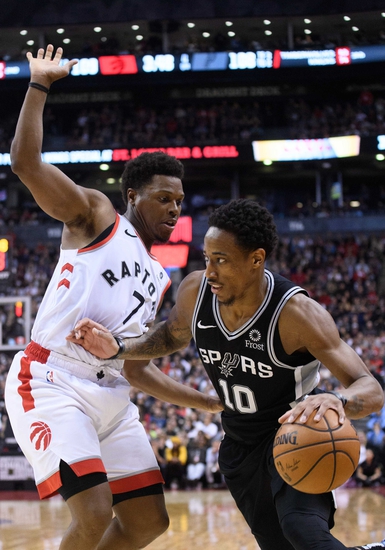 In the Spurs loss to the Grizzlies, San Antonio was led on offense by DeMar DeRozan.  DeRozan connected on 11 of 18 attempts, hitting 13 of 14 free throws, finishing with 36 points, 9 rebounds, and 9 assists.  The Spurs shot 48% from the floor and 43% from deep.  The Spurs took 13 less shots than the Grizzlies, due to giving up 11 offensive rebounds.  The Spurs trailed by as many as 15 points in the game.

In the Raptors win over the Hornets, Toronto was guided throughout the game by Terence Davis.  Davis converted on 8 of 16 attempts from the floor, making all 3 of his foul shots, registering 23 points and 11 rebounds.  Toronto and Charlotte both shot 44% from the floor.  The Raptors took 8 ore shots than Charlotte which turned out to be key.  Toronto forced 20 turnovers en route to the victory.

Spurs are 6-0 ATS in their last 6 games against Toronto.

Raptors are 1-6 ATS in their last 7 January games.

The Spurs have lost 3 of their last 5 games, while the Raptors have split their last 8 games.  The Spurs will have their hands full, as San Antonio ranks 26th in scoring defense.  The Raptors rank 4th in scoring defense, which will make it difficult for the Spurs to score consistently.  San Antonio has struggled on the road, having gone 5-12 on the road.  Toronto is 14-6 at home.  The Spurs have had success ATS in their last 6 against Toronto, but I like the Raptors at home, as Toronto is starting to get healthy.  Final score prediction, Raptors will win and cover,