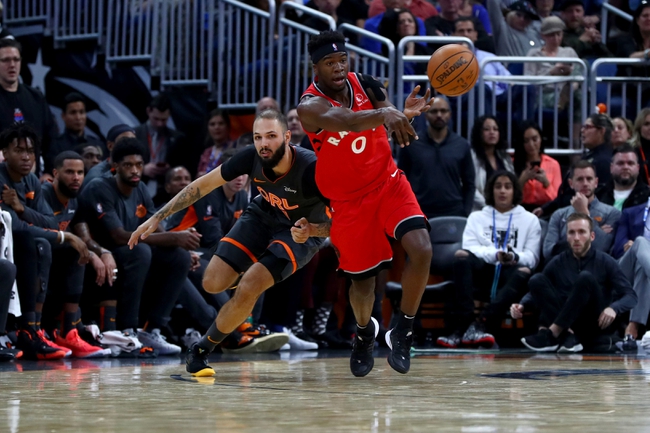 Two of the NBA’s elite teams will face off on Sunday when the Utah Jazz (12-7) travel to the Scotiabank Arena in Toronto to face the defending champion Raptors (14-4). While both teams remain among the best in the NBA, one team enters the game much hotter than the other.

The hot team is Toronto, which has won six in a row, seven of its last eight, and 10 of its last 12. The losses in that stretch were both road games and were against Dallas and the Clippers, two of the best in the league in their own right. Amazingly, the Raptors remain undefeated at home this year and six of the eight home wins have been decided by eight or more points. All eight wins have been by more than the three points Toronto is giving up in this game.

The Raptors have been on a roll, knocking off the Magic in Orlando 90-83 on Friday after crushing the Knicks 126-98 at Scotiabank Arena on Wednesday. In that win over the defensive-minded Magic, Norman Powell went off for a career-best 33 points on 5-of-8 shooting from 3-point range on a night that the rest of his team didn’t shoot the ball well. Fred VanVleet scored 22 points on 5-of-12 shooting from 3-point range and seven steals, but aside from Powell and VanVleet, the rest of the Raptors combined to connect on only 1-of-18 shots from long range. Pascal Siakam added 10 points, 13 rebounds, and five assists in the win. Toronto’s defense was incredible, holding Orlando to 34.6 percent shooting from the field and 24.1 percent from 3-point range.

Utah, while still playing good basketball, isn’t as hot as Toronto. The Jazz have lost two of their last three games and are just 4-4 in their last eight. In addition, Utah is just 4-6 on the road this season, and this game on Sunday against the Raptors is the fourth game of a five-game road trip with the fifth game coming Monday at Philadelphia. On this current road trip, the Jazz opened with a 122-118 loss at Milwaukee, followed by a blowout 121-102 loss at Indiana. Utah rebounded on Friday for a 103-94 victory over Memphis.

The Jazz was able to pull away in the end against Memphis thanks to Bojan Bogdanovic, who scored 16 of his 33 points in the fourth quarter. He also added eight rebounds. Donovan Mitchell added 20 points despite shooting just 7-of-22 from the field. Rudy Gobert scored 13 points with 13 rebounds, and Royce O’Neale added 10 points in the win.