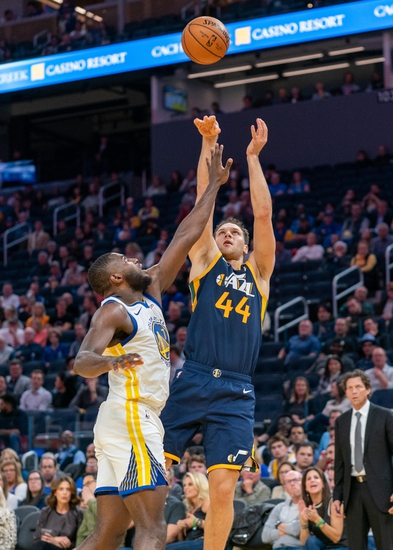 Utah has been impressive this season with its three losses coming to the Lakers, the Clippers, and Sacramento, but the Jazz also has wins over the Kings, the Clippers, the 76ers, and the Bucks this season. On its current three-game win streak, Utah has held Philadelphia, Milwaukee, and Golden State -- three of the top 16 offenses in the NBA this season -- to an average of 104 points per game, leaving no doubt that the Jazz is the No. 1 defense in the NBA allowing teams just 97.0 points per game.

Utah has not been strong on offense but has done enough with its amazing defense to get the job done. Donovan Mitchell averages 24.8 points per game while Bojan Bogdanovic added 21.8 points per game. Mike Conley scores 13.6 points per contest while Rudy Gobert scores 10.9 points with 13.0 rebounds per game, good enough for fifth-best in the NBA.

In comparison, Brooklyn hasn’t won or lost more than two in a row this season but does hold wins over Houston and Portland this season, while the five losses have been against the likes of Minnesota, Phoenix, and Indiana. One thing that has not been a problem for the Nets has been scoring, with the team scoring a minimum of 108 points in every game so far, accounting for the No. 3 offense in the NBA averaging 119.8 points per game. However, Brooklyn is next-to-last in the NBA on defense, allowing 121.7 points per game, allowing at least 109 points in every game this season.

Kyrie Irving ranks third in the NBA scoring 30.0 points per game to go along with 7.2 assists and 5.6 rebounds, while Caris LaVert is one of four other Nets averaging in double figures. LaVert scores 16.8 points per game while Spencer Dinwiddie added 16.7 points. Joe Harris and Taurean Prince add 13.7 and 12.9 points per game respectively, while DeAndre Jordan pulls in 9.6 rebounds per game.

When looking at a game like this, sometimes it is best to look at which is the better team, and what that team does well, betting in that direction. Utah is the better team and it plays defense, leading to just one of its nine games reaching over the total. Therefore, look for the better team to continue on with its strength, taking the under.