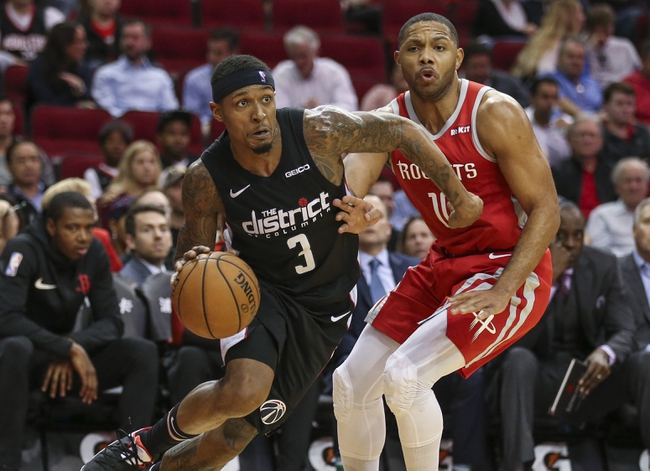 The Houston Rockets hit the road for a matchup with the Washington Wizards in the nations capital.  The Rockets are (2-1) on the season.  The Rockets enter this game, having won their last 2 games.  Most recently the Rockets are coming off a 116-112 victory over the Thunder.  The Washington Wizards are (1-2) thus far and have been on the road for all 3 games this season.  The Wizards lost to the Spurs 124-122 last time out.

The Rockets were led in scoring in their win over the Thunder by James Harden.  Harden had an outstanding performance, netting 40 points on 8 of 21 shooting and 21-22 from the foul line.  Harden added 7 assists out of the team's 21 assists in the game.  Russell Westbrook had a double-double in the game, scoring 21 and grabbing 12 rebounds.  PJ Tucker saw success from behind the 3 point line.  Tucker was 5 of 7 from deep and totaled 17 points in the win. The Rockets shot 43% from the floor.

The Wizards saw 6 of the 9 players that saw playing time finish in double figures in the loss to the Spurs.  Bradley Beal guided the Washington offense, contributing a double-double in the game.  Beal dished out 11 assists and totaled 25 points.  Davis Bertans came off the bench to shoot a perfect 7-7 from the field and 5-5 from 3 point range.  Bertans totaled 23 points in the game.  The Wizards as a team shot 49.5% from the floor and an impressive 47% from deep.

The Rockets are 0-3 ATS this season.

The Rockets are 6-3 ATS in their last 9 vs the Wizards.

The Wizards are 3-0 ATS this season.

The Wizards are 4-10 ATS when at home against the Rockets.

The under is 2-1 in Wizards games this season.

This is a matchup that pairs to teams that are on complete opposite sides of the spectrum, when it comes to covering the spread.  This is also the first home game for the Wizards this year and the first road contest for the Rockets.  A big part of the Rockets offense is shooting the 3 ball.  The Wizards are the 6th best team defensively in guarding the 3 ball.  Look for the Wizards 3 point defense to keep them in this game and to improve to 4-0 ATS.  Final score prediction, Rockets win but the Wizards cover 114-108.