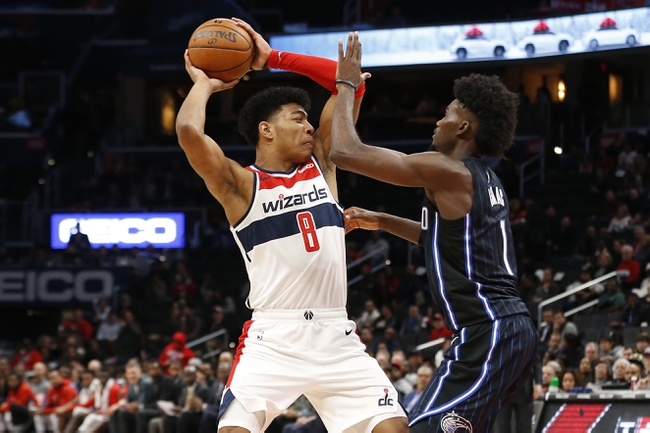 In the Magic loss to the Hawks, Orlando was guided on offense by Nikola Vucevic.  Vucevic connected on 12 of 19 attempts from the floor, recording 27 points.  The Magic shot 41% from the floor and 20% from 3-point range.  The Magic were able to stay in the game, due to forcing 21 turnovers.  The Magic led by as many as 18 points, before Atlanta made a successful comeback.

In the Wizards win over the Heat, Washington was led on offense by Jordan McRae.  McRae connected on 9 of 14 attempts from the floor, making 5 foul shots, totaling 29 points and 8 assists.  The Wizards shot 51% from the floor and 46% from distance.  Washington who has struggled most of the year defensively, the Wizards were able to force 19 turnovers.  Washington won the game due to their 3-point success, making 17 3's compared to Miami's 10.

Magic are 1-4 ATS in their last 5 games against the Wizards.

Wizards are 14-2 SU in their last 16 games when playing the Magic at home.

The Wizards snapped a 2 game losing streak with the win over the Heat.  Orlando is coming off a tough loss against the Atlanta Hawks who have struggled all year.  The Magic blew a rather large lead that got close to 20 points, Orlando will be trying to fix their defense in preparation for this matchup.  These two teams can not be any more complete opposites, the Wizards have the 4th best scoring offense in the league, while the Magic hav the 30th worse scoring offense.  Defensively, the Wizards have the 30th worse scoring defense, while the Magic have the 3rd best.  This game will come down to who can shoot the best from the charity stripe and the Wizards have the edge in that category.  Final prediction, Wizards will win.